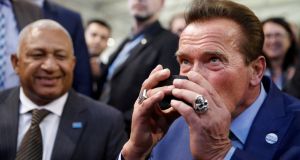 $110.2m
Sum that tennis phenomenon Roger Federer has won in prize money over the course of his career, as of his victory over rising star Alexander Zverev on Tuesday night.

$110.1m
Amount golf champion Tiger Woods has won in his career, meaning he has this week been overtaken by the Swiss 19-times Grand Slam champion in the all-time sport prize money list, according to Forbes.

$109.8m
Sum that the second-highest earner in tennis, the currently injured Novak Djokovic, has amassed in his career. He is six years younger than Federer.

Image of the week: Kava Chameleon

Arnold Schwarzenegger – former Mr Universe, serial Terminator and one-time governor of California – is these days vocal on the scourge of climate change, showing up at the COP23 UN conference in Bonn, Germany, at the weekend to drink kava – a plant-based drink not to be confused with cava – with the event’s president, Fijian prime minister Frank Bainimarama. Schwarzenegger believes governments should start labelling fossil fuels with a public health warning that their use could cause illness and death, while he also suggested customers at petrol stations could be told “what you pump into your tank may kill you” and that oil tankers could be plastered with messages that their contents are dangerous to health. Not sure Trump will go for it, to be honest.

Like a trailer for a bombastic, explosion-filled blockbuster directed by Michael Bay and starring Gerard Butler, the words “Brexit Day” are starting to pop up in headlines. It’s a case of the news only being as silly as the events that underpin it – “silly” being precisely the word that former chancellor, Ken Clarke – the only Conservative to vote against the triggering of Article 50 – used to describe attempts to enshrine the date on which the UK leaves the EU in law. The UK government has proposed an amendment to the European Union (Withdrawal) Bill that will fix 11pm on March 29th, 2019, as the moment the UK exits the EU. The idea from the great minds in charge of Britain is that this will effectively render it impossible for parliament to reject the negotiated deal with the EU in a vote, as to do so would mean the UK would then leave without a deal. At the same time it stupidly weakens the UK’s negotiating hand with the EU. Send in Gerard Butler to sort them out?

Getting to know: Anthony Wood

Anthony Wood (51) is the founder and chief executive of television streaming device maker Roku and he’s the newest tech billionaire after shares in Roku doubled in value in a three-day surge. This meant Wood, who owns 27 per cent of the stock (which floated only in September), has added $652 million to his net worth since last Wednesday, taking his wealth across the billionaire line to $1.07 billion. So that’s nice. Wood’s childhood was usefully spent (in the US, the UK and the Netherlands) building transistor radio kits and a Morse telegraph and later learning to code. In the late 1990s he founded ReplayTV, one of the two earliest digital video recorders (DVRs), because he was tired of missing re-runs of Star Trek: The Next Generation. He’s now one of the people best primed to profit from the television industry shift to streaming.

From old favourites to imported ones, if your diet consists of the following, then you are very much on-trend in 2017.

1 Popcorn: Put your vacuum cleaners on standby as all those varieties of “poshcorn” (lemon-cupcake-flavour popcorn?) means popcorn sales are popping very nicely.

2 Angel Delight: Fifty years after its debut, the whipped dessert is making a comeback thanks to a new ready-to-eat version, owner Premier Foods said this week. File under “retro”.

3 Gin: The fastest growing spirits category in Ireland is guaranteed to wash down the Angel Delight very nicely.

4 Poke bowls: Anyone for a cubed raw fish salad, courtesy of Hawaii? They’re all the rage.

5 Fulfil protein bars: The Irish brand made its debut on the Checkout Top 100 list this year and is now available in Christmas selection boxes to people who just can’t stomach a Curly Wurly.