Brexit: Southern firms more concerned than those in North

Despite fact impact already being felt in NI, SMEs in the Republic are more pessimistic 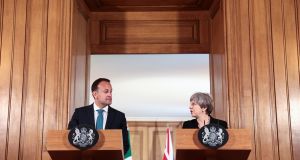 Businesses in the Republic are more pessimistic about the effects of Brexit than those in Northern Ireland, even though firms in the North have experienced more of an immediate impact from UK voters’ decision last year to quit the European Union, according to a new survey from AIB.

The inaugural AIB Brexit Sentiment Index for the third quarter of this year found that 41 per cent of small to medium-sized enterprises in Northern Ireland were already feeling a negative impact from Brexit, compared with 26 per cent in the Republic.

However, SMEs in the Republic are slightly more pessimistic, registering a reading of -41 on the new sentiment index, compared with -38 in the North. A reading on the index can range from -100 to +100.

“While the impact is already being felt, particularly by those invoicing in sterling, most businesses in the Republic of Ireland believe that the greatest challenges lie ahead,” said Catherine Moroney, head of business banking at AIB.

EU leaders are due to meet next month, following six rounds of Brexit talks to date, to decide whether sufficient progress has been made on three key issues – citizens’ rights; the UK’s divorce bill; and Irish-specific concerns about the Border – before phase two talks on future arrangements can commence.

Discussions on Friday between Taoiseach Leo Varadkar and British prime minister Theresa May in Sweden and Minister for Foreign Affairs Simon Coveney and his British counterpart, Boris Johnson, exposed the divisions between the two governments over the Border.

While Ireland and the EU insist that the UK explain how it can preserve a soft, frictionless Border before phase-two talks begin, the UK insists that this issue can be tackled in the next stage.

Meanwhile, a separate business sentiment index published by KBC Bank Ireland and Chartered Accountants Ireland indicates that there has been a slight easing in the pace of growth among Irish companies in the past three months.

“Only one in five Irish-based firms doesn’t envisage any impact on their business from Brexit,” said Austin Hughes, chief economist of KBC Bank Ireland. “Companies are now slightly more pessimistic in their assessment of Brexit on their business and roughly half see the peak impact being felt by March 2019. It is slightly surprising that the survey found no major pick-up in Brexit preparations of late and one in two companies reported they had no significant focus on Brexit at present.”