Government more wedded to Trump than EU on climate change 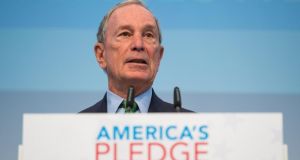 Billionaire and philanthropist Michael Bloomberg has since 2010 spent $164 million on a campaign to end coal-burning in the US. Photograph: Lukas Schulze/Getty Images

Last week war-torn Syria belatedly signed up to the Paris climate accord, leaving the United States as the only country not to support the framework deal and by extension the world’s climate bogeyman.

However, for all US president Donald Trump’s wilfully ignorant musings on the subject – he has on several occasions linked it to a Chinese plot to make US manufacturing uncompetitive – one could legitimately ask if his stance is any less questionable than Ireland’s.

For the best part of a decade, the Government has been playing a two-faced game of pretending to international audiences – the United Nations and the European Union – that it is taking the issue seriously and that it is acting in parallel with international efforts, when in fact it has skirted any meaningful engagement in pursuit of its own narrow economic interests.

The Government’s decade of inaction is, however, finally beginning to overtake its rhetoric. In nearly every metric by which a country can be vetted on climate change, Ireland is failing.

Emissions are on the rise across all sectors; renewable-energy targets have not been met, water quality is plummeting, while cities are clogged with cars and public transport infrastructures starved of investment.

The Government’s climate action plan, meanwhile, commits the State to almost no binding targets and contains only vague aspirations about becoming a carbon-free state at some future date.

Sales of electric cars and hybrids, which accounted for 60 per cent of new vehicle sales in Norway last month, make up barely 0.5 per cent of sales here, while the rollout of a charging infrastructure has been mired in delays and difficulties.

Capital funding for transport is also still skewed two to one in favour of building out and maintaining the State’s road network, which has included funding for several white-elephant projects, such as the €550 million Gort to Tuam motorway, which was knowingly built on a flood plain.

While Paris and other cities are switching their bus fleets from diesel to electric, Dublin Bus was last year refused funding even to trial the use of cleaner electric vehicles.

Up to a million houses, nearly half the State’s stock, also still use home heating oil, one of the most pollutant fossil fuels on the planet, and the Sustainable Energy Authority of Ireland even offers subsidies for people who install smart heating controls with their new boilers, effectively locking in oil use for another 20 years.

Most of the measures we have around climate change were brought in by the Green Party, during its stint in government between 2007 and 2011, and have never been added to or enhanced.

On agriculture, the dairy herd is being expanded as the industry moves to exploit the ending of milk quotas and meet ambitious targets laid out in the Government’s Foodwise 2025 strategy without any consideration of the impact on land use, water quality or emissions.

Despite official declarations to the contrary, Ireland has one of the highest level of greenhouse gas emissions per euro of agricultural output in the EU because of the primary focus on more carbon-intensive beef and dairy systems, which contrasts with other countries where forestry, vegetables and grains account for a larger share of activity.

A recommendation from the recent Citizens’ Assembly to impose a carbon tax on farming activity was immediately shot down by the Irish Farmers’ Association and met with silence from the Government.

In the wake of the assembly’s climate-change recommendations, Minister for Climate Action and Environment Denis Naughten said “as a nation we are engaged and ready to move on from the model [of existence] we inherited from the Industrial Revolution” – a sentence that is not borne out by the facts.

He will presumably make the same sort of noises at this week’s climate talks in Bonn but there is now a growing belief that the Government has failed and is unwilling to act on climate change and that issue must be taken up by civil society and business.

US billionaire and philanthropist Michael Bloomberg has been spearheading a campaign to end coal-burning in the US. He has already spent $164 million on the campaign since 2010, during which time more than half the US’s coal-fired power plants have been closed. Last week, he announced an additional $50 million to expand the programme to Europe.

He has repeatedly argued that the mass closure of coal plants in the US did not result from government action but from civil-society advocacy building on the falling costs of renewable energy. The implication for Ireland is obvious.