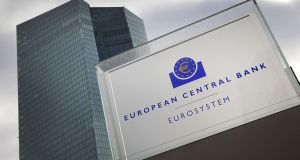 Having faced five years of anaemic inflation, the ECB has deployed its entire policy arsenal, cutting rates into negative territory, giving banks cheap loans and hoovering up bonds, all in the hope of boosting growth and rekindling inflation.

The European Central Bank kept its ultra-easy policy stance unchanged on Thursday, promising to hold rates low for an extended period and even maintaining a pledge to provide more stimulus if needed.

Six weeks after agreeing to halve asset buys from January, the bank reiterated its commitment to continue bond purchases at least until the end of September, and to keep reinvesting cash from maturing debt until much later to support a rebound in growth and inflation.

Attention now turns to ECB president Mario Draghi’s Thursday afternoon news conference where he will present fresh economic forecasts and may discuss whether hawkish policymakers continued to push for a shift in the bank’s guidance on bond buys.

Having faced five years of anaemic inflation, the ECB has deployed its entire policy arsenal, cutting rates into negative territory, giving banks cheap loans and hoovering up bonds, all in the hope of boosting growth and rekindling inflation.

Its work has paid off as the euro zone recovery is now well into its fifth year thanks to nine million new jobs, letting policymakers curb stimulus from next year and raising the prospect that the lavish bond buys it started in early 2015 could finally end.

But the economic run is stronger than most have expected.

This rapid expansion is fuelling arguments among more conservative policymakers that the ECB is moving too slowly and should be more decisive in signalling the end quantitative easing to preserve its remaining firepower after the crisis tested its limits.

Shifting the ECB’s message on stimulus may have been made easier by a benign market reaction to the Federal Reserve’s third, well telegraphed interest rate hike this year late on Wednesday.

This was a sign that investors were confident enough in the state of the global economy not to fear a continued, albeit very gradual, increase in the cost of borrowing dollars - the currency that underpins much of world trade.

Indeed, policy hawks in Frankfurt are likely to have pushed Draghi to keep preparing markets for an end to asset buys sometime next year, arguing for changes in the bank’s message to set up a formal decision by mid-year on ending a 2.55 trillion euro ($3 trillion) bond purchase scheme.

The first clue to future policy will come from the ECB’s new economic projections, which are likely to show better growth for the year ahead and a broadly unchanged or marginally improved inflation path.

The key number to watch will be the ECB’s initial forecast for 2020 inflation to see whether rising oil prices push the inflation path higher and how far it is from the bank’s target of close-to-but-below 2 percent.

Analysts see the figure in the 1.7-1.8 percent range and while the target is intentionally vague, Draghi has said that 1.7 percent is considered a miss so any figure at the bottom of expectations would make it difficult to argue for an exit.

But a benign 2020 projection could rekindle the debate about the end of asset buys.

In October several influential policymakers argued that the ECB should amend its guidance, cutting the direct link between inflation and bond purchases.

They argued that the ECB should instead connect its overall policy stance to inflation, de facto cutting the emphasis on quantitative easing (QE) and making it easier to end it.

Another key item for the meeting will be a discussion on how to distribute purchases from next year onwards.

Some policymakers argue that the ECB should increase the proportion of private sector purchases by keeping those volumes steady when sovereign purchases are cut from January.

Such a shift could also take some pressure off sovereign buys as the ECB is nearing its self-imposed purchase limits in several countries. ($1 = 0.8514 euros)