Underlying trend continues to be driven by rising housing costs 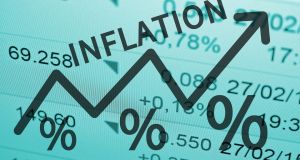 Inflationary pressure in the Irish economy remains relatively weak at 0.5 per cent, the latest Consumer Price Index for November reveals.

The main monthly changes affecting the index were increases in the cost of clothing and footwear (+2 per cent); and transport (+0.5 per cent), which includes motor insurance.

This was counteracted by the cost of hotel accommodation and restaurant prices, which fell by 0.8 per cent.

However, the underlying trend continues to be driven by an uptick in the cost of housing, water, electricity, gas and other fuels, which rose by 3.7 per cent on an annual basis.

Within this, the cost of private rental accommodation rose by 5.6 per cent in past 12 months, reflecting the current housing crisis.

After several months of negative price growth, Irish inflation is now in positive territory, partially reflecting an upward swing across the euro area, where inflation is now running at 1.5 per cent.

“Despite strong Irish economic growth, there is little sign of sustained pressure on the prices front, which appears to be the same story across the Eurozone, suggesting that the European Central Bank will be in no hurry to tighten monetary policy,” Merrion economist Alan McQuaid said.

“Although the annual inflation rate should pick up in the coming months, inflationary pressures in Ireland as measured by the headline consumer price index are in general likely to stay reasonably-well contained for the immediate future,” he said.

Mr McQuaid said oil prices would be critical in determining the headline inflation outlook over the next 12 months, but they remain volatile and hard to predict given the uncertainty over Opec supply and geopolitical tensions in the Middle East.

This was the first strong signal that a tightening labour market here was beginning to place upward pressure on wages.

“However, with the economy continuing to grow strongly, the more immediate worry on the domestic inflation front centres around increased wage demands, particularly in the public service,” Mr McQuaid said.