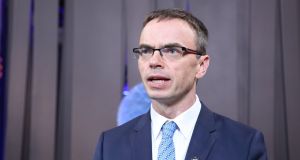 Sven Mikser, the Estonian minister chairing a meeting of ministers preparing for the leaders’ summit, said he was confident that Brexit talks would now progress into their next phase.

EU countries have toughened their stance on Brexit, making clear that talks on a future EU-UK relationship will not begin until March and insisting Britain will stay fully covered by EU rules during a transition — while losing its voice within regulatory agencies — after it leaves the bloc in 2019.

Senior national officials have changed draft guidelines on the next phase of talks so they no longer suggest that “preliminary and preparatory” discussions on trade can begin early next year.

Theresa May’s government has promised an ambitious and far-reaching trade deal as the final goal of the Brexit talks, although the EU says a formal accord will have to wait until the UK leaves the bloc and that only a more general “political declaration” will be possible beforehand.

The new version of the guidelines s, which alters a text issued by European Council president Donald Tusk after Mrs May held successful divorce talks in Brussels last week, make clear that EU countries oppose a quick start to such trade negotiations.

Diplomats said member states were irritated by comments over the weekend by David Davis, the UK’s Brexit minister, that last week’s agreement was “much more a statement of intent than it was a legally enforceable thing”.

One diplomat described Mr Davis’s comments, which the UK minister says were taken out of context, as “fighting after the fight is over”.

Michael Roth, Germany’s Europe minister, said he was “surprised” by the difference between the messages that British officials gave in Brussels and London.

The text now says the discussions on trade will begin only after the bloc’s governments agree additional guidance for the talks between themselves to elaborate on the EU’s position, and specifies that such guidance will only be adopted in March.

It foresees that talks with the UK between January and March next year will instead be focused on the conditions the EU will set for the transition period that Mrs May seeks of about two years after 2019.

It reiterates that during the transition the UK will have to comply fully with EU trade policy — and not strike its own deals — even though the country is due in 2019 to fall out of trade agreements with more than 50 nations that have struck accords with the EU.

The draft also says that once the UK leaves the bloc, it will lose not just its voting rights in EU institutions but also any right to “participate in the decision-making of the Union bodies, offices and agencies”. It adds that the UK will have to comply with any new EU rules produced during the transition, including technical standards set by the bloc’s roughly 40 specialised agencies, which cover sectors ranging from food standards to maritime safety.

UK groups from sectors including chemicals, pharmaceuticals and airlines have asked to remain under EU rules even after the transition, so as to prevent obstacles to trade and avoid duplicating or increasing regulations.

The discussion of the text comes ahead of an EU summit this week that is set to give the formal green light to the next stage in Brexit talks after last week’s divorce deal.

EU officials expect the talks over trade and the UK and EU’s future relationship to be the trickiest and most time-pressed part of the future Brexit negotiations. “Breaking up is hard. But breaking up and building a new relationship is much harder”, Mr Tusk said last week.

Officials said the bloc was resolved to prevent any backsliding in Britain’s commitments, although they said Mr Davis’s remarks were not discussed at the meeting of senior national officials in Brussels on Monday.

A senior EU official said that the text was “Davis-proof”. “The guidelines will be very clear on what happens if the progress achieved in the first phase is not respected,” he said, referring to the bloc’s demand that any final agreement covering transition and trade must incorporate without change the divorce deal agreed last week.

The officials added that the changes made to the draft text reflected concern in Berlin and other capitals that the EU should not be too quick to make commitments on the future relationship that would take the pressure off the UK to settle outstanding Brexit divorce questions — also a strong concern of the European Parliament.

Sven Mikser, the Estonian minister chairing a meeting of ministers preparing for the leaders’ summit, said he was confident that Brexit talks would now progress into their next phase.

“I’m positive that we’ll be able to reach a point where heads of state and government can decide to move on to the second phase of the negotiation so there has been sufficient progress that would allow us to start discussing the future relationship”, Mr Mikser said.