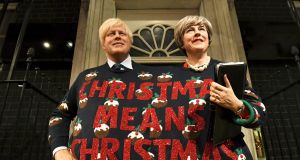 Image of the week: Waxit

Right now, these wax figures are merely standing on a replica of the step outside Number 10 Downing Street that tourists and lovers of queues can find at Madame Tussauds.

The word is, however, that the waxworks are just as well briefed, possess a stronger moral core and are less likely to melt under pressure than most of the current Cabinet and are therefore ready to be deployed for prime ministers’ questions, dinners in Brussels and other important tasks at this diplomatically sensitive time.

In numbers: The Force Reawakens

Possible opening weekend box office worldwide for Star Wars: The Last Jedi, according to Hollywood-tracking site Deadline. This would put it below 2015’s franchise rebooter Star Wars: The Force Awakens.

Length in metres of the giant lightsaber dangling from a helicopter that Star Wars studio Disney flew over Sydney Harbour in October in one of many pre-release publicity stunts for the movie.

Peak altitude of the “Earth’s Wild Atlantic Way” billboard inviting anyone passing the planet to visit Star Wars location Skellig Michael. It was launched using a weather balloon to form what Tourism Ireland called “the first ever tourism campaign in space”.

#FBPE has been making an appearance of late in tweets and on Twitter profiles of people, mostly in the UK, who want to #StopBrexit. The idea, apparently, is to build a network of like-minded Remainers under one “Follow Back Pro-Europe” hashtag (sometimes expressed as #FollowBackProEU), so that they can reassure themselves that they’re not going mad in a sea of bots and Brexiteers, and amplify each other’s tweets across Twitter through active favouriting and retweeting. While pro-Brexit accounts (be they human or bot) can be identified by account names with a long sequence of numbers followed by a Union Jack emoji, the despairing #FBPE side like to add the hashtag followed by two emojis: the Union Jack and European Union flag side-by-side. And they say people are easily misunderstood on social media.

Getting to know: Chamath Palihapitiya

“First they ignore you, then they ridicule you, then they fight you, and then you win,” is the quotation that adorns the Twitter profile of venture capitalist Chamath Palihapitiya (34), the chief executive of Palo Alto-based Social Capital and owner of current National Basketball Association champions, the Golden State Warriors. Palihapitiya, a former vice-president of user growth at Facebook who won big on its IPO, was the source of a front-page splash on the Daily Mail on Tuesday under the possibly overdramatic headline “Facebook ‘ripping society apart’.” His comment (made last month) that “we have created tools that are ripping apart the social fabric of how society works” prompted Facebook to respond that he hadn’t worked at the company for more than six years and “Facebook was a very different company back then”. Meanwhile, Social Capital says its mission is to “advance humanity by solving the world’s hardest problems”. The best of luck with that.

Deutsche Bank has come in for a bit of deserved stick for identifying “Irish presidential elections” as its 23rd biggest “market risk” for next year. Somehow its analysts were under the mistaken impression that the occupancy of the Áras has the capacity to rock Wall Street. Here are five of its more credible suggestions.

1. No more stimulus: The European Central Bank could feasibly signal an exit from its quantitative easing programme in the second quarter, which would be a nervous moment for all concerned.

2. The testing of Jerome Powell: Will the new Federal Reserve chairman be driven by politics or data? (Data would be nice.)

3. Bitcoin crash: Please tell me no one has started putting pensions into cryptocurrencies. They’re mortgaging their houses to buy it? Oh.

4. “New government in UK?”: Closely followed by “UK reversing Brexit decision?” It’s going to be squeaky bum time in Westminster, even if the FTSE glides on.