Market Beat: The outgoing ECB president has long been calling on governments to start spending 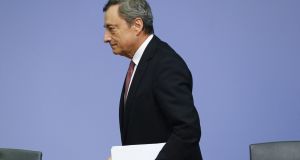 Mario Draghi can be assured that he’ll end his term as European Central Bank (ECB) president in November with political platitudes from across the continent ringing in his hear for having saved the euro.

Since his “whatever it takes” speech seven years ago, the Italian has unfurled a series of once-inconceivable measures to help solve the euro’s existential crisis. These included a programme to buy sovereign bonds, called outright monetary transactions (OMT), that soothed flighty markets at the height of the crisis but never needed to be activated, and a quantitative easing (QE) programme that was actually used to buy €2.6 trillion of debt.

But even with other unprecedented actions, such as cutting the ECB’s main interest rate to zero and pushing its deposit rates into negative territory, the bank remains well off course in delivering its central task of raising inflation to close to 2 per cent.

ECB staff this week downgraded their forecasts for euro zone economic growth. They now see it expanding by 1.2 per cent next year. Their inflation projection has also been marked down, to 1 per cent, compared to 1.2 per cent for 2019.

The sources of concern are all around: global trade tensions and uncertainty over Brexit dragging on confidence, euro zone industrial production having been in contraction mode for most of this year, and the fact that Germany, the currency region’s largest economy, is most likely already in recession.

The threat of an outright downturn across the euro zone, while still low, according to Draghi, is growing.

There had been some loud calls in recent weeks from more hawkish members of the ECB’s governing council to hold back on taking extreme action now.

However, Draghi – who has always seemed keen to keep financial markets onside – secured support from his governing council on Thursday to deliver on a promise made in June that he would throw the kitchen sink at Europe’s problems.

The ECB has cut its deposit rate from minus 0.4 per cent to minus 0.5 per cent and moved to restart the QE engine, which had been stood down in December, and start to purchase €20 billion of bonds in the market a month from November. No targeted end date has been added to the programme.

Other, more esoteric, steps include a lowering of rates on the ECB’s already-cheap, long-term bank lending programme that is designed to get money into the real economy.

And, in the ECB’s bid to offer some relief to beleaguered banks, whose margins are being squeezed by lower-for-longer central bank rates, say hello to a new thing called tiered rates. This essentially means that part of the excess funds on banks’ balance sheets will be exempt from the ECB’s punitive negative deposit rate.

All the latest measures were pushed through with various degrees of support from governing council members.

What got unanimous backing, however, was Draghi’s call on governments that have the financial leeway to do so, to start spending to reignite the economy.

The ECB president has been pleading for years for governments that can afford it – read: Germany – to do their part, but it has fallen on deaf ears. Getting the full support of the often-disparate, 25-member ECB governing council on this issue is a significant message.

“Almost all the things you see in Europe, the creation of more than 11 million in a short period of time, the recovery, the sustained growth for several quarters, were by and large produced by our monetary policy. There was little else,” Draghi said on Thursday. “Now it’s high time for the fiscal policy to take charge.”

Some see this as a desperate cry from a bank that is running out of options.

“Central banks are loath to ever admit to reaching the limits of monetary policy, but that is more or less where we think the ECB is,” said Deutsche Bank economist Mark Wall, adding that while the latest Draghi package “is rich in many dimensions” it will not do much, in itself, to boost the economy.

Low bond market yields – driven by ECB’s QE programme in recent years – normally prompt banks to lend more, so that they can rely on business volumes driving income growth as margins are under pressure. However, Wall reckons that this is no longer the case in the euro zone, suggesting that further easing of monetary policy would be counterproductive.

Morgan Stanley economists, including Daniele Antonucci, appear to agree. Their number-crunching machines “suggest that even bigger policy packages aren’t likely to meaningfully boost growth, let alone inflation this time around”, they said in a note to clients on Friday.

There was little to suggest as EU finance ministers converged on Helsinki on Friday for an informal meeting that Germany, which has run a large budget surplus for each of the past five years, was preparing for a pre-emptive loosening of the purse strings.

German finance minister Olaf Scholz said earlier in the week that his government stands ready to pump “many, many billions of euros” into its economy should it and Europe fall into recession.

In other words, hold on, as usual, until crisis hits before taking action.