The country’s financial system dwarfs that of other EU countries despite population of 420,000 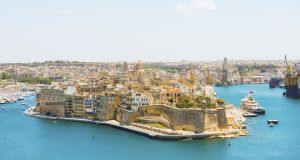 Malta has been sharply criticised by an influential European monitoring body for inadequately tackling financial crime, in a report highlighting the risks of its large banking and online gambling sectors.

The report, which in the past has been closely watched internationally including by US treasury officials, is a setback for the island that has sought to repair its reputation following the murder of a journalist investigating corruption.

A group of key Maltese government ministers issued a statement to say they were happy with the progress the country had made so far and they would prepare a one-year plan to implement Moneyval’s 58 recommendations.

They said the country was “deeply committed” to tackling money laundering and terrorist financing.

Despite having a population of only 420,000, Malta, a former British naval stronghold south of Sicily, has a financial sector that dwarfs many EU countries. It is also the European leader in online gaming.

Moneyval said that although the country had tried to better understand money laundering risks, investigations were hampered by “limited resources, both human and financial”.

Moneyval said they were “not convinced” Maltese police could effectively investigate and prosecute “cases related to financial, bribery and corruption offences.”

Last year, Pilatus Bank, an international lender based on the island, was shut down by the European Central Bank after its chairman was accused in the United States of money laundering and bank fraud.

The lender had received a clean sheet from Maltese authorities despite allegations of processing corrupt payments by investigative journalist Daphne Caruana Galizia, who was killed by a car bomb.

There is no proven link between her murder and reports she wrote about the bank. – Reuters

1 US threatens retaliation against EU over proposed carbon tax
2 Money matters: ‘My father embarrassed us with his haggling’
3 Comcast acquires Irish cloud-based telco Blueface
4 High costs and low returns will fuel nursing home shortage - CBRE
5 Firm sues Trinity College over contract for managing visitors
6 Ryanair to pay portion of Peter Bellew’s legal costs, court rules
7 Pilita Clark: When a rude boss keeps you waiting, why not walk out?
8 How to . . . move (almost) everything to your new phone
9 Higher costs result in steep decline in profits at Parc Aviation
10 Airbus poised for deal with regulators to settle corruption probes
Real news has value SUBSCRIBE