Emerald Contract Centre will increase its headcount to 340 by 2021 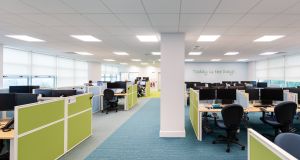 Emerald Contact Centre will employ 340 staff in Waterford by 2021.

Contract call centre group Emerald Contact Centre said it would create 200 new jobs from its Waterford base over the coming three years.

The business, which provides customer care and sales support to financial, health and travel publications, said its workforce in the southeast would expand to 340 by 2021 with new jobs for agents with international languages such as Spanish, Portuguese, German, French and English.

The company, which was launched in 2015, said it would fill the first 50 roles by the end of this year having moved to new office space.

“Today’s announcement of 200 additional jobs is a testament to the calibre of people and skill set we have found here in the southeast,” said Emerald president Roseann Miller. She added: “We fully expect this growth to continue.”

Emerald is a sister company of US-based TCC Maryland, a call centre operator which was founded in 2012. The company is ultimately controlled by Agora Publishing, one of the world’s largest and most successful consumer newsletter publishers.

“This is a terrific announcement for Waterford and the southeast region,” said Denis Curran, IDA Ireland’s divisional head of regional development.

“Emerald Contact Centre has made great strides since establishing in Waterford four years ago. The 200 new jobs will greatly benefit the economies of Waterford and the wider southeast region.”