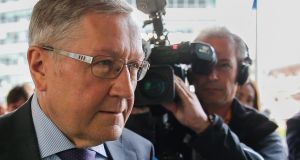 European Stability Mechanism (ESM) managing director Klaus Regling warned on Friday that the Republic faces a “very challenging” situation as it deals with the opposing threats of a Brexit-related slowdown and economic overheating.

Speaking to reporters after an informal meeting of euro zone ministers in Helsinki, during which a post-bailout surveillance mission to Ireland in May was discussed, Mr Regling said the State has “had a fantastic economic development” since it exited its aid programme in 2013.

“But there are new challenges and vulnerabilities linked to Brexit, but also there may be some overheating,” he said. “So, it’s a very challenging situation.”

Minister for Finance Paschal Donohoe on Friday also highlighted the risks Brexit poses for Ireland and other countries as the topic was formally added to a eurogroup meeting agenda for the first time, according to sources.

Mr Donohoe thanked the European Commission and other member states for their help in preparing for the implications of the UK’s departure and reiterated the Government’s line that it is open to alternatives to the backstop as long as they are realistic, legally binding and workable in practice, they said.

The Irish Fiscal Advisory Council warned this week that the Government could face a large budget deficit should the UK exit the European Union without a withdrawal agreement, with the risk of rising unemployment-related expenses and falling taxes leading to “severe budgetary costs”.

However, it also highlighted the risks of economic overheating, as some economists predict that the UK exiting the EU with a deal could lead to greater-than-expected economic growth.

UK chancellor of the exchequer Sajid Javid told Bloomberg TV in an interview in Helsinki ahead of a meeting of finance ministers from the wider EU on Friday afternoon that he was “feeling increasingly optimistic” that his government would secure a withdrawal deal and exit the union on schedule on October 31st.

“There’s actually a lot of work being done on both sides,” he said. “There’s still a lot of work to do. I think that people understand that we do need to end this. We do plan to leave on October 31st, we will leave, and we want to leave with a deal.”

However, he added: “If it’s a no-deal outcome, eventually we’ll need some kind of deal. So, I think it’s in everyone’s interest that we knuckle down, get on with it, and strike a deal as soon as we can.”

When asked if British prime minister Boris Johnson would defy a UK anti-no-deal law passed last week and take his country out of the EU even without an accord, Mr Javid said: “We’ll absolutely make sure that all laws are followed at all times.

“At the same time, it’s right so say we have a policy to leave on October 31st and that is what we have to do.”

The chancellor said Mr Johnson would be hoping to strike a deal with EU leaders’ at their two-day summit ending on October 18th.