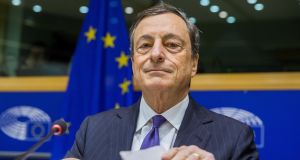 Is ECB president Mario Draghi going to go out with a bang? Photograph: STEPHANIE LECOCQ/EPA

Mario Draghi wants to go out with a bang, by launching a fresh wave of monetary easing before he steps down as European Central Bank president in October — but the vital question is whether the bank’s governing council will agree.

Mr Draghi is expected to put the option of fresh stimulus measures up for discussion at the ECB’s board meeting on Thursday, in response to worries about an economic slowdown and subdued inflation in the eurozone.

He has four main options: interest rates could be cut further into record negative territory; the quantitative easing programme could be restarted to buy more bonds on top of the € 2.6tn the ECB already holds; cheap loans can be offered to lenders; and the central bank could strengthen its forward guidance.

With bond markets already pricing in a significant stimulus and the German economy teetering on the brink of recession, the stakes for Mr Draghi are high, especially as he is facing growing opposition from other leading eurozone policymakers.

The heads of the German, Dutch, Austrian and Estonian central banks — who sit on the ECB governing council — have all in the past couple of weeks stated their opposition to the idea of restarting QE.

Sabine Lautenschläger, one of six ECB executive board members, summed up the hawkish backlash by saying: “Based on the current data, it is much too early for a huge package.”But most investors believe Mr Draghi has pushed the prospect of stimulus so heavily that he cannot back down.“To take a step back now would be a communications disaster,” said Katharina Utermöhl, senior economist for Europe at Allianz. “The hawkish remarks from some central bank governors only confirm to me that a big package is coming.”

Since Mr Draghi proposed a restart of the QE programme in June at the ECB’s annual symposium in Sintra, Portugal, yields on all eurozone sovereign bonds have dropped, and for the first time all German government bonds up to 30 years in maturity offer negative yields.

“They’ll say: ‘Look at market expectations, if we don’t meet them we will get slaughtered’,” said Melvyn Krauss, a senior fellow at Stanford University’s Hoover Institution. “Everything points to Draghi doing QE at this meeting in September.”

Investors are divided on the size of any new QE programme. Elga Bartsch, head of economic and market research at BlackRock, said the ECB should buy € 30-40bn of bonds a month for at least a year. Frederik Ducrozet, an economist at Pictet Wealth Management, said the ECB needed to buy at least €600bn of bonds in total.

Finnish central bank governor Olli Rehn recently said that “substantial and sufficient” bond purchases would be part of the ECB’s September package. Yet bond prices dipped last week as some investors asked if market expectations had run ahead of themselves. French central bank governor François Villeroy de Galhau added to these doubts by questioning whether it was the right time to restart QE when long-term bond yields have already fallen so hard.

“This is a question to be discussed,” he said.Critics say that any further easing loses its effectiveness when interest rates are already at unprecedented lows, leaving the ECB with few remaining options. But people in Mr Draghi’s inner circle scoff at the idea that he is running out of ammunition or needs to keep some powder dry to allow Christine Lagarde, the incoming ECB president, to respond to risks including Brexit and the US-China trade war after her planned start at the ECB on November 1.

People in Mr Draghi’s inner circle point to the fact that inflation remains weak across the 19-country currency zone. Market participants’ price expectations, as measured by the five-year, five-year inflation swap rate, languish at 1.2 per cent — well below the ECB’s target of close to 2 per cent.

In particular, some key ECB figures think that short-term corporate bond markets are an area where yields could be lowered further. They also think the ECB could raise the proportion of any nation’s government bonds that it can own above the current 33 per cent cap, despite German opposition to such a move.

There is broad consensus that the ECB will cut its deposit rate for the first time since March 2016 when it fell to a record low of minus 0.4 per cent. Even the hawkish German central bank boss Jens Weidmann has begrudgingly accepted this. The only question is whether it will be cut to minus 0.5 per cent or minus 0.6 per cent.

The impact of another rate cut on the eurozone’s already fragile banking system is a concern. The ECB has said it may mitigate this with a tiering system to exclude a portion of banks’ excess deposits from negative rates, similar to rules already in place in Japan, Denmark and Switzerland.It is also due to provide a fresh wave of cheap loans to banks under its third targeted longer-term refinancing operation.

Finally, the ECB signalled in July that it was considering changing its forward guidance. Instead of committing only to not raise rates before mid-2020, it could say that rates will only rise if inflation expectations come in line with its target. This would send an even stronger signal that negative rates are here to stay, probably for several years to come — which could be exactly the parting shot that Mr Draghi is looking for. – Copyright The Financial Times Limited 2019.

1 How can I view my dead brother’s will if I’m not the executor?
2 Investors pile into property as turnover in build-to-rent sector reaches €2.54bn
3 Provisional liquidator appointed to Dublin engineering firm
4 Bursting of Tesla bubble a case of ‘not if, but when’
5 Kerry’s Chinese sales set for 30% hit from coronavirus
6 Euro zone and Germany back fiscal boost to tackle downturns
7 Number in employment rose 3.5% in final quarter
8 Parties’ media policies a mixed bag of the ambitious and the stale
9 Finance Ireland plans stock market flotation in May
10 Must you pay a price for ethical investment?
Real news has value SUBSCRIBE