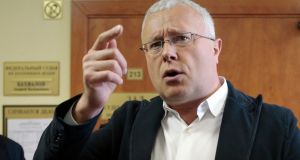 Alexander Lebedev, the one-time Russian oligarch who controls the Independent and London Evening Standard newspapers in the UK, claims Ireland is part of a system of “global financial apartheid” caused by large-scale tax avoidance.

Mr Lebedev this week launched his book, Hunt The Banker, which discusses his business career and various disputes he had with rivals. It also discusses how many wealthy Russian business people stash their gains in offshore tax havens, as well as tax avoidance structures used by many large businesses.

Mr Lebedev argues that tax havens should be “shut down” to “make the financial world transparent and fair”.

Speaking to The Irish Times, Mr Lebedev claimed this State, which is often central in the tax avoidance structures of large multinationals, is a part of a system that deprives other countries, including developing nations, of revenue.

“It is the main purpose of my book: to highlight this global financial apartheid,” he said. Mr Lebedev said he made no distinction between large-scale avoidance of tax on corporate profits and offshore tax antics of billionaires.

“No [there is no distinction]. In Ireland, the US, Britain, everybody has to pay tax. But if you are big enough, you use an offshore structure to pay little or no tax, and then it is ok,” he said.

Mr Lebedev questioned what the benefits are for Ireland in allowing the State to be used to facilitate large-scale tax avoidance by businesses.

“It would be interesting to analyse what Ireland gains from all of this. OK, a little bit of money flows through Ireland. [But] Margrethe Vestager, the European commissioner [who pursued Ireland and Apple over tax avoidance] has just been given a bigger job. What do you gain?”

He said the role played by Ireland, and other nations, in facilitating tax avoidance is “simply not fair”.

Mr Lebedev said he it would be difficult to expect a small state like Ireland to act unilaterally to combat large-scale tax avoidance, but it should act with other countries to call a “global conference to say: stop it”.

Respected US economist Gabriel Zucman last month said Ireland remains the biggest “tax haven” for US multinationals and he claims research shows they pay an effective tax rate of 4.9 per cent here.

The Government has repeatedly denied the State is a “tax haven” and has criticised the research, highlighting Irish efforts to combat abuse of the tax system.

Mr Lebedev’s book charts his career from being a KGB spy to an “honest banker” in post-Soviet Russia, where he owns National Reserve Bank. He has also owned various industrial holdings and had a share of Russian airline, Aeroflot.

The book provides details of business disputes and threats he received in Russia, including attempts to fire grenades at his premises.

The one-time billionaire and self-described “ex oligarch” lost much of his assets following legal disputes several years ago, but is still a banker.

In his book, he refers to when he bought the Independent in London and its Sunday sister title for £1 in 2010 from Irish group, Independent News & Media (INM), then under the control of Sir Anthony O’Reilly.

Mr Lebedev said this week he did not meet Sir Anthony to conclude the deal, as it was “done at arm’s length”.

He said he was aware of the dispute at the time between Sir Anthony and then-minority INM shareholder Denis O’Brien, who had been pushing for a sale of the UK Independent titles.

“That dispute didn’t affect the transaction,” he said.

The book, which is written in a wry and occasionally humorous style, is scathing of the wealth flaunting of some billionaires: “Money warms only a shallow soul. It shrivels the heart, gives no peace...”

He calls on the Russian state to pursue oligarchs for at least $100 billion that he says was “stolen” from his country’s national assets. The book contains little criticism or scrutiny, however, of Russian president, Vladimir Putin, who has been the dominant figure in the country’s politics for 20 years.