China’s growth slowdown ‘not going to be a disaster’ 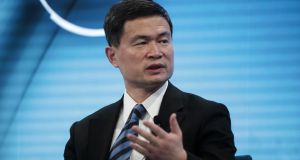 Fang Xinghai, vice chairman of China Securities Regulatory Commission, gestures as he speaks during a panel session on the opening day of the World Economic Forum in Davos. Photograph: Jason Alden/Bloomberg

The slowdown in China’s growth rate to levels not seen in almost three decades “is not going to be a disaster,” a senior Chinese official said at the World Economic Forum (WEF) in Davos on Tuesday.

The comments come a day after the International Monetary Fund (IMF) chairwoman Christine Lagarde warned that a sharper slowdown of the world’s second-largest economy is one of the greatest risks facing the globe. The IMF lowered its global economic growth forecasts on Monday for this year and next.

“China is slowing down, but it’s not going to be a disaster,” said Fang Xinghai, vice chairman of the China Securities Regulatory Commission, on a panel on global financial risks, one of the opening sessions of the four-day forum in the Swiss Alpine town. “That’s because of trade, and a slowdown of the real-estate market, which is very much needed. But a slowdown of China is not a collapse.”

Mr Fang said that China’s export figures for December were “not very encouraging”. However, Beijing can still “leverage a lot” to expand fiscal policy support the economy, even if corporates are struggling with debt levels that are too high, he said.

Chinese government officials also have an ability to react quickly – and centrally – to changing financial conditions, he said, noting that the country is “rare” among emerging economies in managing to avert a very significant financial crisis over the past 40 years.

The Chinese economy grew at 6.6 per cent last year, the slowest pace since 1990, amid a trade stand-off between the country and the US, according to figures released on Monday, with rate set to ease further, to about 6 per cent in 2019, according to Mr Xinghai.

Hopes of a Davos breakthrough on the ongoing trade war were dashed last week as US president Donald Trump withdrew a senior White House delegation – including Treasury Secretary Steven Mnuchin, Secretary of State Mike Pompeo and Commerce Secretary Wilbur Ross – from attending the WEF, citing the partial US government shutdown. Earlier in the month, Mr Trump cancelled his own plans to travel to Davos for a second year in a row.