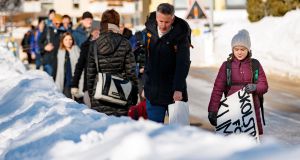 Taoiseach Leo Varadkar and Minister for Finance Paschal Donohoe will press their concerns about Brexit at a series of meetings at Davos with global political and business leaders over the coming days.

Mr Varadkar has been added as a late addition to a Thursday morning panel at the World Economic Forum (WEF), alongside Dutch counterpart Mark Rutte, British chancellor of the exchequer Philip Hammond and Polish prime minster Mateusz Morawiecki to discuss challenges facing Europe, from Brexit to migration and cybersecurity.

The Taoiseach, travelling on Wednesday afternoon to the Swiss Alpine town with Minister Donohoe, is due to meet Microsoft co-founder and philanthropist Bill Gates later in the evening to discuss overseas development aid. He will also hold meetings with Austrian chancellor Sebastian Kurz on Thursday and Croatian premier Andrej Plenkovic on Friday.

“The Taoiseach’s programme includes bilateral meetings with political leaders at a crucial time for Brexit, with chief executives of multinational firms which have significant operations in Ireland,” a government spokesman said.

The Taoiseach’s arrival in Davos follows some mixed messaging from UK trade secretary Liam Fox at the conference on Wednesday. Mr Fox told BBC Radio that he is telling everyone he meets that a no-deal Brexit is a “real possibility” that they should prepare for, while he told CNBC that he believed that there was a “good chance” of the UK securing an EU exit deal.

EU Economic Affairs Commissioner Pierre Moscovici told Reuters in an interview at the WEF on Wednesday that the risk of a no-deal Brexit has increased in recent weeks and that it was up to the UK to tell the EU how they propose to break the impasse.

UK members of parliament are proposing alternative plans to Mrs May’s withdrawal agreement, which was rejected in a vote at Westminster last week, including seeking an extension to the March 29th EU departure date. However, the prime minister told MPs on Wednesday that attempting a delay would not solve the situation and that the “right way” to rule out a no-deal is to approve her withdrawal agreement.

Meanwhile, Mr Donohoe is set to take part in a panel on international tax issues at Davos on Thursday afternoon alongside Organisation for Economic Co-operation and Development (OECD) secretary general Angel Gurria.

“Throughout their engagements, the Taoiseach and Minister Donohoe will promote Ireland’s strengths as a leading location for business and investment, and our commitment to open, free and rules-based trading,” the spokesman said.

Pilita Clark: Why we’re about to learn if we are really in the A-team 06:00
‘I have a talent for justifying purchases’ 05:20
Irish whiskey sales near milestone of 12m cases a year 05:00
Military-style planning can help businesses battle Covid-19 survival threat 04:49
People ‘overloaded’ by social media more likely to believe false stories 00:01

1 Should my mam wait for house prices to drop before buying?
2 ‘I have a talent for justifying purchases’
3 Irish whiskey sales near milestone of 12m cases a year
4 Chris Johns: Past is another country when it comes to our post-pandemic future
5 Citigroup warns that markets are out of step with reality
6 Pilita Clark: Why we’re about to learn if we are really in the A-team
7 ‘I’m so lucky to be in the Caribbean – a million miles from Derry Girls’
8 People ‘overloaded’ by social media more likely to believe false stories
9 Military-style planning can help businesses battle Covid-19 survival threat
10 Joint accounts: if one of us dies, can the other access the money?
Real news has value SUBSCRIBE