Davos 2019: U2 frontman calls on business leaders to join fight against extreme poverty 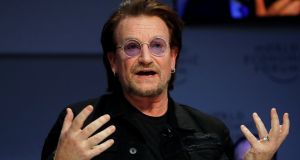 Bono, U2 singer and co-founder of the One campaign, speaks during the World Economic Forum (WEF) annual meeting in Davos, Switzerland. Photograph: Arnd Wiegmann/Reuters

U2 frontman and social activist Bono endeared himself to an audience of global business leaders at the World Economic Forum in Davos on Wednesday when he said that capitalism is “not immoral” as he called on them to join the fight against extreme poverty in Africa and Aids.

“Capitalism is not immoral – it’s amoral. It requires our instruction,” Bono said on a Davos panel discussing how to fill a multitrillion-dollar financing gap in the achievement of a UN goal to end poverty globally by 2030. “Capitalism has taken more people out of poverty than any other ‘ism’. But it is a wild beast that, if not tamed, can chew up a lot of people along the way.”

Bono, co-founder of One, a global campaign and advocacy organisation with more than 10 million members seeking to end extreme poverty, said that the negative forces of unfettered capitalism have driven an international move towards populism.

The singer said public-sector spending – as the Global Fund to Fight Aids, Tuberculosis and Malaria, for example, is currently seeking to raise $14 billion to save an estimated 16 million lives – is the most vulnerable as governments in developed states in Europe grapple with domestic problems such as homelessness.

However, he said, “If Africa fails, Europe cannot succeed.”

The UN estimates that achieving its so-called sustainable development goals (SDG) of eradicating poverty and hunger everywhere and reducing inequality within and among countries by 2030 will require a total global spend of $5 trillion to $7 trillion, with a investment gap in developing countries of about $2.5 trillion.

Thirdly, recipients of aid and investment from overseas firms need to spend efficiently – with “no white elephants and no corruption along the line”.

Ms Lagarde cautioned emerging countries against hiring high-cost consultants to draw up plans to attract development money, saying the UN’s 17 SDG principles are a sufficient starting point. “The principles are there. Don’t reinvent them,” she said.

Bill McGlashan, an executive with US investment giant TPG Capital and chief executive of its Rise Fund social impact fund, co-founded by Bono, said that investments by the corporate world in projects across developing countries must demonstrate “credit returns and credible impact” to be sustainable.

Bono and TPG unveiled a new company on Wednesday, called Y Analytics, which will measure the social and environmental effect created by investments. Mr McGlashan said that the “greenwashing or marketing” of opportunities as so-called impact investments, without a proper assessment of the tangible benefits, has made the business world “appropriately cynical” about this area in the past.