Covid-19: Businesses that survived first lockdown may not survive a second 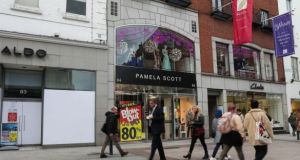 The closure of a dozen Pamela Scott stores is just the latest example of financial stress in the retail sector. Photograph: Crispin Rodwell

Minister for Finance Paschal Donohoe warned in his budget speech that borrowing this year might be higher than forecast if further restrictions had to be introduced in response to Covid-19. However, he surely did not anticipate how quickly this possibility would come onto the agenda.

As Cabinet meets on Monday, the economic cost of moving to Level 4 or 5 will be a key consideration. For business, the move from Level 3 to 4 involves the most significant closures, at least as currently set down in the framework.

There would be direct costs to the exchequer, with a few hundred thousand people moving back onto the Pandemic Unemployment Payment (PUP) as they get laid off from sectors such as retail, hairdressing, leisure and other parts of services and manufacturing sectors not classified as essential.

There would also be significant risks that many businesses that survived the first lockdown would not survive a second time; the closure of a dozen Pamela Scott stores is just the latest example of financial stress in the retail sector. And for many in this sector, the weeks running up to Christmas are when they make the bulk of their earnings in a year.

Donohoe has also referenced the risk of many people going back onto the PUP for the second time.

The costs of the virus becoming more widespread are also serious in economic, as well as health, terms

There would also be wider fears that, even if the economy reopened after this lockdown, another period of closure would inevitably await in the new year.

The financial cost to the exchequer is difficult to calculate exactly. However, a four- to six-week lockdown could quickly add €1 billion or more to the €21.5 billion deficit this year – although the fact that it came in below target this year does give some leeway. More serious would be fears about the wider damage as the economy moves into next year and the recovery which had been under way goes into reverse.

The impact of this on consumer and business confidence is potentially significant. However, Ministers will know that the costs of the virus becoming more widespread are also serious in economic, as well as health, terms. So a key part of the decision is whether they believe current restrictions can bring virus numbers down, or keep them under control.

Part of any decision will be serious consideration of what sectors can remain open. Currently only businesses defined as essential can operate at Level 5, and at Level 4 there is not much more leeway – bar allowing outdoor businesses such as garden centres to operate.

However, the construction sector is being allowed to continue at Level 4 in the Border counties. This is likely to be the case nationwide if restrictions are tightened – at least to Level 4 – and consideration could also be given to keeping at least some parts of the retail sector open.

By allowing more businesses to remain open, the financial cost and economic disruption could be reduced to some extent. But it would still be significant and mean restrictions here were at a level above most other EU countries. And it would raise big economic questions about how we live with the virus moving into next year.