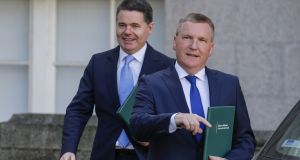 Low-income families will benefit most from measures outlined in Budget 2021 earlier this week, according to the Economic and Social Research Institute (ESRI).

However, research from the institute also shows that many workers will see an increase in their effective tax burden next year, while low-income young, single workers stand to lose the most if employment opportunities haven’t recovered by the time Covid-related supports are removed.

In examining the distributional impact of Budget 2021, researchers at the think tank’s post-budget briefing said that, overall, the budget was progressive in terms of ensuring that the tax burden increases with income.

The researchers pointed to “quite significant” increases made on the welfare front, such as increasing the rate for a qualifying child by up to €5 a week, and increasing the maximum working family payment by €10 a week, increases which are “well targeted at reducing child poverty”.

“While increases to the carbon tax and tobacco duty disproportionately affect lower income households, these [households] gain significantly from increases to social welfare payments for adults with children and those living alone,” the ESRI researchers said.

While the budget may have cushioned low-income workers from the worst of the crisis, failure to increase tax bands or credits means many workers will actually see a small increase in their tax burden next year. This is because tax bands and credits are not rising in line with inflation.

As research officer Barra Roantree noted, the PAYE credit, which is to remain at €1,650, will be “worth a little bit less to you next year because you can buy less goods and services with it”.

The ESRI also questioned the appropriateness of some of the budget day measures in achieving stated goals. On the reduction in VAT for the hospitality and hairdressing sectors, which is due to cost some €400 million through to the end of 2021, Mr Roantree questioned how targeted and timely it is. Given that people may be scared – and are also restricted – in spending money in these sectors, it’s not obvious how it will help, he said.

“As a stimulatory measure, cutting VAT isn’t likely to be particularly effective,” he said, adding that those that may benefit from the rate cut are those that are able to stay open, and thus are likely to be the least affected from the pandemic in the first place.

Similarly, he questioned how effective extending the enhanced Help-to-Buy scheme will be in helping those on lower incomes access the housing market, querying whether it is a “poorly targeted policy likely to fuel house price growth”.

On Covid-related job supports, the ESRI said the Budget 2021 measures built on action taken earlier in the year, which cushioned the incomes of those affected by pandemic-related job losses.

“Without these, disposable incomes would have fallen by 7 per cent overall,” it said. The ESRI says the Pandemic Unemployment Payment (PUP) and Employment Wage Subsidy Scheme (EWSS) played a major role in reducing income losses from 7 per cent to 3 per cent, on average.

“Budget 2021 has continued this trend, with income losses expected to be cushioned by a further 0.2 per cent on average,” the researchers said.

Without these Covid-related policy supports, income inequality and poverty rates would have increased.

Withdrawal of these supports will cause challenges, however, particularly among younger people.

“If these supports are withdrawn it is young people that stand to lose the most if they can’t find work,” said senior research officer Karina Doorley, noting that 18-29 year olds would have suffered an average 14 per cent decrease in disposable income, if it were not for Covid supports.

Given the potential impact on low-income young, single workers, Ms Doorley noted that Government could look at some supports to target this group when wage supports are removed.

Another challenge is that some younger people are now earning more with PUP than they would otherwise, which can act as a disincentive to finding work.