Coveney to meet UK foreign secretary for talks on Brexit 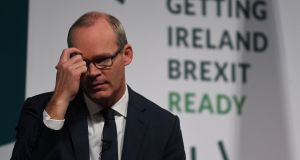 Minister for Foreign Affairs Simon Coveney is to meet UK foreign secretary Jeremy Hunt on Wednesday in London to discuss the ongoing Brexit talks and the prospects for holding a summit this month to try to finalise the legal agreement on the UK’s exit. Mr Coveney had previously scheduled meetings with senior French ministers in Paris on Wednesday afternoon, but has decided to meet his UK counterpart on the way.

UK and EU officials are trying to find a way to address the Irish Border backstop, the key outstanding issue in finalising the withdrawal agreement, the legal text paving the way for the UK’s departure. The backstop is intended as a guarantee to ensure there will be no hard border on the island of Ireland, no matter what the outcome is of future trade talks. However the EU’s proposal on how the backstop would work has been rejected by the UK.

After the meeting in London, Mr Coveney will travel to Paris to meet the French foreign minister, Jean-Yves Le Drian, and the European affairs minister, Nathalie Loiseau. France has been a strong supporter of Ireland on the Border issue.

Talks between the UK and EU are at a delicate stage, following the failure to make progress at last month’s summit of EU leaders. Due to this, the EU deferred any decision on whether to hold a special summit in November to try to sign off on a withdrawal agreement. A decision is likely by next weekend on whether this summit will now go ahead, with November 16th/17th pencilled in as possible dates, but no clear view yet on the likelihood of the summit going ahead.

If there is no November summit, the issue will go forward to the EU leaders summit in December, with time then running short to reach a decision.

At his meeting with Mr Hunt, Mr Coveney is expected to again underline the UK’s political commitment last December to the backstop agreement. The UK has since hit out against the EU’s backstop plan, saying it would separate Northern Ireland in trade terms from the rest of the UK. This is also a crunch issue for the DUP, who the Conservatives need to support the UK budget in a series of votes this week. London has put forward the idea of the whole of the UK remaining in a customs union with the EU for a period after Brexit as an alternative.

In Paris, Mr Coveney will hope for a reiteration of French support for the Irish position on the Border issue and support for the Belfast Agreement. Ahead of the trip, Mr Coveney thanked France for its solidarity in the Brexit talks, in an interview with France 24.