UK budget not quite as generous as first thought 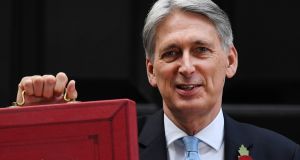 It’s only the day after the budget that the full extent of a chancellor’s generosity – or stinginess – tends to become apparent, once the number crunchers have spent the night poring over the small print.

Thus the reviews on Tuesday for the last budget before Brexit weren’t quite as favourable as Monday’s snap reactions, which ranged from “the largest giveaway since 2010” to “the Phil-good factor” and, with a nod to Halloween, “No tricks ... just treats.”

As he did the rounds of the television and radio studios yesterday, Philip Hammond was forced to defend his decision to delay balancing the nation’s books in favour of additional funding for the National Health Service.

As well as increased spending on the NHS, the chancellor delivered a surprise £3 billion (€3.4 billion) income tax giveaway, as he brought forward by a year the Tory party’s election pledge to raise personal tax allowances.

This is worth £860 a year to a higher-rate taxpayer and has the feel of a pre-election bribe about it, so much so that prime minister Theresa May, in Oslo on Tuesday for a conference, was forced to deny any plans for a snap poll.

To the relief of almost everyone, May declared that an early general election “would not be in the national interest”.

But is Hammond’s budget in the national interest? He may have declared that austerity is coming to an end, but there are still more than £4 billion of benefit cuts looming, while the extra NHS spending will come at the expense of other government departments.

As the budget was still being digested, the ratings agency Standard & Poor’s delivered a dose of Brexit reality, warning that in the event of a no-deal exit, Britain would tumble into a lengthy recession and face a cut to its AA credit rating.

A cut in Britain’s credit rating would, of course, push up the treasury’s borrowing costs. Such a recession could last four to five quarters, S&P warned, with the economy contracting by 1.2 per cent next year and by 1.5 per cent in 2020. By 2021, the economy would still be 5.5 per cent less than in the event of an orderly exit.

The budget verdicts of the Resolution Foundation and the Institute for Fiscal Studies (IFS) are always eagerly awaited in the City and in Westminster, and the two think tanks did not hold back on Tuesday.

“This is no bonanza,” declared IFS director Paul Johnson. “If I were a prison governor, a local authority chief executive or a head teacher, I would struggle to find much to celebrate. I would be preparing for more difficult years ahead.”

The chancellor is “gambling” on public finances, Johnson said, warning that, in the IFS’s view, there’s a one-in-three chance the public finance forecasts could deteriorate significantly next year as Britain exits the European Union.

It was, of course, the reduced borrowing forecasts provided by the independent forecasting body, the Office for Budget Responsibility (OBR), on the back of higher-than-expected tax receipts that allowed Hammond to deliver his “giveaway” budget.

But, as the IFS pointed out, “what the OBR gives, the OBR can take away.”

The Resolution Foundation, meanwhile, calculates that almost half the income tax cuts will go to the top 10 per cent of households and warns that the squeeze will continue for low- and middle-income families.

Director Torsten Bell highlights the fact that three quarters of the £12 billion of welfare cuts announced after the 2015 general election remain government policy.

In April, for example, the imposition of a £1.5 billion benefit freeze will see a couple with two children in the bottom half of the income distribution lose £200.

Even for higher earners, the good news didn’t look quite as bright on Tuesday as it did when chancellor Hammond first delivered it on Monday. On closer inspection, that £860 tax cut falls to £520 once higher national insurance is taken into account.