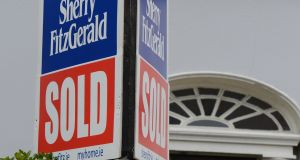 Ireland’s largest estate agent Sherry FitzGerald paid a dividend of just more than over ¤1 million to shareholders last year on the back of strong sales for both new and second-hand homes, according to accounts just filed. This was the first such payment by the company since 2002.

The Minister for Finance, Paschal Donohoe, has said he plans to introduce laws early next year to give the Central Bank more powers to make top bankers accountable for failings under their watch. This follows up on a key recommendation in the Central Bank’s review, published in July, of the culture of the State’s lenders in the wake of the tracker mortgage crisis.

This week’s Agenda considers the recommendations of the Law Reform Commission report on ways to tackle white-collar crime and the lessons we can learn from the UK.

Two prominent Dublin car dealerships owned by the Gowan Group are to close, with its landmark outlet in Ballsbridge, Dublin being sold for an estimated €18 million. The business owned by the Maughan family, which holds the Irish franchise for Peugeot and Honda vehicles, is closing its dealerships in Merrion Road, Dublin 4, and another just off the Glenageary Roundabout in Dún Laoghaire, Co Dublin. Both businesses are due to shut next month with the loss of up to 15 jobs.

House builder Victoria Homes has expanded the planning application for its site in Carrickmines, south Co Dublin, to include up to 1,500 homes. This is nearly double the number of units contained in the original plan for the Glenamuck Road site, making it the largest residential development undertaken in the State since the recession.

Peter Coppinger and Dan Mackey, the founders of Cork technology firm Teamwork, have scooped this year’s overall EY Entrepreneur of the Year award. The software-as-a-services company, which was established in 2007, counts many of the world’s most influential companies among its clients, including Disney, Netflix, Forbes, Paypal and Spotify. Bill Wolsey, founder and managing director of the Northern Irish hospitality group Beannchor, won the industry category, while Dr Elaine Sullivan, co-founder and chief executive of early-stage life-sciences company Carrick Therapeutics picked up the prize in the emerging category.

Ivan Coulter, the founder and former boss of Sigmoid Pharma, has been appointed chief executive of a new UCD spinout drug company that is tackling a deadly heart condition.

For this week’s interview, Charlie Taylor went to Hamburg to meet Eckart Diepenhorst, the effusive new chief executive of MyTaxi. Despite major teething problems following the Hailo rebrand as customers were migrated over to the MyTaxi app in the Republic, Dipenhorst says “The Irish business is one we are all incredibly proud of and I believe there is further growth possible in the market if we can get enough drivers.”

Columnist John FitzGerald warns that Britain’s Brexit ‘civil war’ could lead to a disastrous end not only for its union with Scotland, but also for the future of the North.

Finally, in his Caveat column, Mark Paul asks how long until the dark forces afflicting UK retailing crash the Irish house party? “There is a sense building among some in the retail sector that Ireland is overdue a dose of Hell on the High Street.”