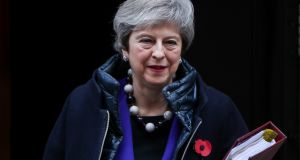 British prime minister Theresa May: Ultimately, the withdrawal and Belfast agreements are reconcilable. They will have to be if the no-hard-border backstop, to which the UK has already committed itself, is to be agreed. Photograph: Simon Dawson/Bloomberg

There is a striking similarity between the Belfast Agreement and the proposed but yet to be agreed Brexit withdrawal agreement, ie the divorce agreement between the EU and the UK, which promises to uphold and safeguard the former. To protect it, in the words of EU Commission president Jean-Claude Juncker, “in its entirety, every line, every letter”.

The withdrawal agreement will be an international treaty, as is the Belfast Agreement, and the two share a central purpose: the redefining, redrawing, and ordering of the relationship between two sovereign polities and the managing of transition in that relationship.

In one case, the agreement is open-ended, with the possibility of decisive parting of Northern Ireland from the UK through a referendum at some stage on unity; the other involves a formal rupture of the UK from the EU, with Northern Ireland remaining in the former, but in a special relationship to the latter.

What has become fiercely contested in the attempt to marry the two agreements is precisely the constitutional status of Northern Ireland in that new special relationship.

Does the possibility of customs controls, or any kind of checks, on the Irish Sea really undermine the constitutional order and character of the Union and really constitute such a threat that, in Theresa May’s words, “no British prime minister could ever agree to it”?

And the Belfast Agreement is proof of it.

Signed up to by a British prime minister, the Belfast Agreement represented, in the political sphere, precisely the sort of “one country, two systems” thinking – China’s rationalisation for Hong Kong’s separate development under its control after Beijing took over – that customs controls on the Irish Sea might do in the economic sphere.

Why should we see economic divergence as qualitatively different from political divergence?

The Belfast Agreement wasn’t just about a new power-sharing, devolved government and the breaking of the culture of majoritarianism, so much part of the political culture of Toryism and unionism.

North-South co-operation in myriad projects can be cast as a normal, healthy win-win relationship between neighbours, rather than a fundamental concession of sovereignty

The agreement also enshrined minority rights and human rights, a new voting system, a provision for a referendum on unity, an acknowledgment of Ireland’s interest in the governance of the North . . . all contributing to the idea that the Union’s survival as such did not require all its various parts to work the same way.

A deal was possible only because unionist politicians in the North and in the UK were able to accept – some only eventually – that such a transitional status for the North, although in effect on a separate political path from the rest of the UK, did not represent a qualitative transformation of the Union or the undermining of their status as UK citizens.

And they accepted that North-South co-operation in myriad projects can be cast as a normal, healthy win-win relationship between neighbours, rather than a fundamental concession of sovereignty. Just as trade can be in the future.

Niall Ó Dochartaigh, of the politics department in NUI Galway, has written in an important and insightful paper on the Irish Humanities blog on the relationship between the two agreements.

“Contrary to unionist arguments that the Belfast Agreement essentially freezes relations across the border and the Irish Sea,” he argues, “the open-ended references in it to cross-border bodies and possible future expansion of North-South co-operation implicitly allow for the kind of reordering of relationships between the Republic and the North of the kind that would be involved in special EU status for Northern Ireland.”

No way, says the DUP.

And yet, ironically, as Ó Dochartaigh points out, “one of the most unexpected twists in the past year is the way in which prominent unionist politicians have taken strong ownership of the Belfast Agreement. It was rejected and opposed by the DUP in 1998, but senior party members now invoke it as a kind of unionist backstop, a fundamental document that rules out any changes in the relationship between Great Britain and Northern Ireland as the UK leaves the European Union.”

DUP MP Jeffrey Donaldson has insisted that the EU’s proposed backstop in the Irish protocol of the withdrawal agreement is wrong because it “is a fundamental breach of the Good Friday [Belfast] Agreement”.

Ultimately, the withdrawal and Belfast agreements are reconcilable. They will have to be if the no-hard-border backstop, to which the UK has already committed itself, is to be agreed.

But a reconciliation is only possible if London and the DUP embrace the Belfast Agreement Chinese logic of “one country, two systems”.

1 ‘Summer is not lost’ – Taoiseach announces accelerated easing of coronavirus restrictions
2 California police fatally shoot 22-year-old man on knees with hands up
3 Coronavirus: People to be allowed to travel anywhere in their county from Monday
4 Covid-19 restrictions: What you still can’t do this weekend
5 Coronavirus: Seven more deaths in the State and 28 new cases confirmed
Real news has value SUBSCRIBE