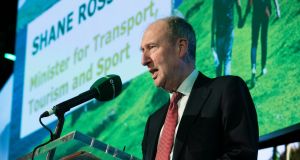 The Minister for Communications, Richard Bruton, has denied reports of a further delay to the National Broadband Plan (NBP) amid speculation he had been due to bring the plan to Cabinet this week. Eoin Burke-Kennedy explains the current state of play.

Eoin also reports that talk of a slowdown in home-building may have been overstated with new figures showing a big uptick in building commencement notices nationally and in Dublin.

It comes as a report from Davy forecasts new mortgage lending will overtake repayments on home loans next year in the Republic for the first time since the outset of the financial crisis.

A Co Meath couple are due to get a payout of up to ¤266 million from the sale of their payment solutions business to an Australian company. Peter Hamilton reports.

Fáilte Ireland has blamed myriad factors including Brexit, the re-emergence of Turkey as a competitor destination, and the grounding of Boeing 737 Max aircraft for a “softening” of the tourism sector in 2019. Mark Paul reports on its plan to tackle the likely economic turblence in 2020.

Preparations for a new electricity interconnector linking Ireland and Wales have begun, with the first planning applications submitted. Ciara O’Brien has the details on plans to run the connection between Co Wexford and Freshwater West in Pembrokeshire.

In her media and marketing column, Laura Slattery warns that Ireland has a lot to lose from the Government’s anti-RTÉ stance.

Finally, in personal finance, Brian Hutton asks if it is worth shopping around for a better deal on credit card interest, while Prionsias O’Mahony warns of the perils of “home bias” when it comes to investing.

1 Revenue publishes list of companies tapping State for wage support
2 Developers may need to go back to the drawing board as one-beds fall from favour
3 How long can Government afford to keep State pension age at 66?
4 Cosgrave Property Group secures exit from Nama
5 Bake-off soy sauce tweet backfires for UK trade ministry
6 Covid-19 will have a significantly worse impact on UK public finances than on ours
7 Halfords sees 700% increase in sales of e-scooters
8 Grocery shopping app Buymie delivering for Devan Hughes
9 Tighter regulations for car makers will drive buyers to choose electric
10 NatWest CEO declines to give timeline for Ulster Bank decision
Real news has value SUBSCRIBE