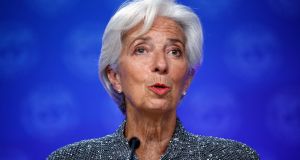 Christine Lagarde is to face calls for an overhaul of how the European Central Bank decides monetary policy as senior colleagues use the start of her presidency to argue for changes including formal votes on setting interest rates.

Ms Lagarde replaced Mario Draghi as ECB president at the start of the month and has invited the governing council, its top policymaking body, to present ideas on how to improve the central bank’s internal discussions. The issue is part of the agenda for her first council meeting on Wednesday.

Officials at four of the national central banks represented on the governing council said they would make proposals ranging from holding regular votes on monetary policy to requesting that the president does not pre-announce policy plans.

At the moment votes on interest rates – the highest-profile decisions taken by the ECB – are held only on the initiative of the bank’s president.

Many of the ideas stem from frustration at how Mr Draghi oversaw monetary policy debates. This tension spilled over into public dissent by senior officials about the fresh wave of ultra-cheap money the bank launched in September, to respond to signs of an economic downturn in the eurozone.

Several of the central bank’s top decision makers were annoyed by Mr Draghi’s practice of announcing monetary policy changes before discussing them with the council.

The council is made up of the 19 central bank heads from each euro zone member country and six executive board members, including Ms Lagarde.

“I think it is a good idea to raise these things at the start, as these are more technical and organisation issues, so let’s put them on the table and have a proper discussion,” said one council member. “We want a more open, more consensual debate.”

Some of the proposals would bring the ECB more into line with the US Federal Reserve and the Bank of England, which both have regular votes on monetary policy decisions and publish the individual positions of their top decision makers.

At least one council member wants to have a vote on every monetary policy decision.

Ms Lagarde, who has yet to speak to several council members since starting the job on November 1, is expected to use her political experience as former head of the IMF and French finance minister to try to heal divisions within the ECB. She said before arriving at the central bank that she would “start with teamwork”.

Divisions within the council may make it harder for Ms Lagarde to loosen monetary policy further. This could frustrate investors, as markets are pricing in another rate cut next spring.

In September, the ECB’s monetary easing measures were opposed by about a third of the governing council, but no vote was held.

Several other council members said they would support the majority view despite criticising parts of the package, leaving some doubt over how they might have voted.

Mr Draghi said after the meeting, however, that there was such a “clear majority” in favour that a vote was not needed.

Among the dissenters, there was anger that Mr Draghi brushed off their opposition to the package, which included a cut in the ECB’s deposit rate and a restarting of its €2.6 trillion bond-buying programme.

The ECB has only published accounts of its monetary policy meetings since 2015, but it rarely has votes and never publishes details of individual council members’ positions.

There have been discussions about whether to hold regular votes on monetary policy before, such as in 2013, when executive board member Benoît Cœuré proposed such a move and also said the voting record should be published.