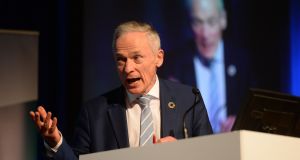 Minister for Communications Richard Bruton has denied reports of a further delay to the National Broadband Plan (NBP) amid speculation he had been due to bring the plan to Cabinet this week.

“My officials are working with the European Commission to complete the State aid element...we’re also completing the due diligence element with the contractor,” Mr Bruton told reporters.

“When that process is completed I will go to Cabinet but not before,” he said, suggesting this would be “some time before the end of the year”.

The Government is expected to award the controversial €3 billion contract to its preferred bidder Granahan McCourt. The US investment firm, founded by tech billionaire David McCourt, ended up being the only bidder in the contest after Eir and Siro dropped out.

Work on the project, which aims to bring high-speed broadband to 540,000 mainly rural premises, is expected to start next year and take up to seven years to complete, although the majority of homes will be passed within the first three years.

The Regional Internet Service Providers Association (Rispa), the industry body which represents smaller rural wireless operators, confirmed, however, it is considering a possible legal challenge to the plan on State aid grounds.

The current EU state aid rules restrict governments from funding services where they are offered commercially by private operators.

Rispa managing director Marcus Matthews said the group would decide later this month on whether to submit a formal State aid challenge to the EU Commission.

The Government has been under pressure to justify the cost of its flagship communications project after it emerged earlier this year that the price tag had jumped from the original estimate of €500 million to €3 billion and in the wake of Eir’s assertion it could do it for €1 billion.

Department of Public Expenditure officials, including Secretary General Robert Watt, have warned Government that a number of projects could be delayed as a result of extra capital money being spent on broadband.

These included more than 2,000 social housing units, 18 primary schools and up to 10 primary healthcare centres.

However, Minister for Finance Paschal Donohoe said the additional cost will come from “future revenues” and will not derail other planned projects. The plan, first announced as far back as 2012, has been beset by delays and setbacks and largely shunned by the industry here.

Telecoms firms Eir and Siro had been favourites to win the State contract but resigned from the bidding process, citing difficulties with the tender and the overall viability of the project.

1 In six months we will be in the grip of a 1980s-style recession
2 Angela Merkel sweeps in to save the euro zone
3 Don’t expect a bonanza for Ireland from the EU’s €750bn recovery cash
4 Property price drop of up to 12% this year a ‘reasonable’ assumption – McDonagh
5 What will it take to reopen the world to travel?
Real news has value SUBSCRIBE