Greenlink interconnector will come ashore in Wexford and in Pembrokeshire 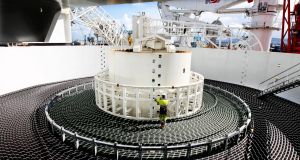 Type of cable to be laid across the Irish sea. Photograph: Maxwell’s

Preparations for a new electricity interconnector linking Ireland and Wales have begun, with the first planning applications submitted.

The applications cover the marine components of the project in both regions. The public consultation process will now get underway, giving stakeholders the chance to weigh in on the project, which will connect the electricity grids in Ireland and Britain.

The Greenlink interconnector will come ashore under Baginbun beach in Co Wexford and Freshwater West in Pembrokeshire.

Construction contracts for the new project are already going through the procurement process, with agreements signed for connecting to the grid in Ireland and Wales. The project is expected to take three years to build with commissioning in 2023.

“This is a major milestone for the development of the project, marking the start of the consenting process. It represents the culmination of a considerable amount of technical, environmental and commercial analysis to design a project of the highest quality with valuable input from a range of stakeholders,” said Angus Norman, project director for Greenlink Interconnector. “Along with the recent signing of our grid connection agreement with EirGrid – another significant milestone – the Greenlink project is on a clear pathway towards the start of construction.”

Separate applications and consultation processes will be carried out for the onshore works.

There are already two electricity interconnectors to the island of Ireland, the Moyle Interconnector from north Antrim to Scotland, and the East-West Connector from the east coast of Ireland to north Wales. A third is planned between Ireland and France, linking east Cork to northeast Brittany. The Greenlink connector will bring the total to four.