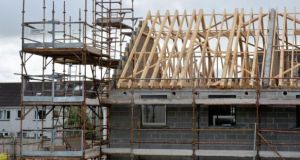 According to a new report, there were 7,596 commencement notices or housing starts in the third quarter of 2019

Reports of a slowdown in home-building may have been overstated with new figures showing a big uptick in building commencement notices nationally and in Dublin.

According to the Building Control Management System (BCMS), there were 7,596 commencement notices or housing starts in the third quarter of 2019, up 33 per cent year on year.

While commencement notices are not an accurate reflection of new homes being built, they are a strong indicator of future supply.

The BCMS figures show housing starts nationally totalled nearly 20,000 in the first nine months of the year, up 22 per cent on an annual basis, and 6,474 in Dublin, up 18 per cent.

“Given the usual 12-month lag, this activity should translate into stronger completions in 2020,” Davy analyst Conall MacCoille said, noting there was now an upside risk to its forecast for 21,800 housing completions in 2019, rising to 24,500 in 2020.

“Analysis by some commentators that weaker house price inflation and Brexit uncertainty were depressing homebuilding is clearly well wide of the mark,” he said.

The BCMS data comes in the wake of a report last week showing housing output in Dublin had effectively stalled in the second quarter of this year despite the shortage of properties to rent or buy.

According to the latest Dublin Economic Monitor, compiled on behalf of the city’s four local authorities, housing completions and commencements in the capital fell in the second quarter 2019.

The slowdown was linked by analysts to the Central Bank’s stricter mortgage rules and uncertainty around the Government’s Help to Buy scheme in the run-up to the budget.

Housing completions nationally rose by 25 per cent to 18,072 last year and are expected to be up again this year. However, they are still expected to lag demand in the economy, which is estimated at 30,000 units annually.

Property price inflation has slowed to 2 per cent, its lowest level in six years, indicating a gradual cooling of the market in price terms.

The latest official figures show the middle or median price paid for a home in the Republic in the 12 months to August was €264,852.

This represented an annual increase of 2 per cent down from nearly 9 per cent a year ago.

The slowdown was even more pronounced in Dublin where prices actually fell by 0.3 per cent on an annual basis in August.