Germany offers lessons for those who want a united Ireland

Breaking up a country is relatively easy but, as the Germans discovered, putting it together again is much more challenging 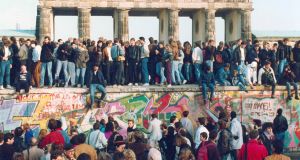 The fall of the Berlin Wall 30 years ago tomorrow triggered the most fundamental change in Europe since the second World War. Photograph: AP Photo, File

Three major things I had hoped but never expected to see in my lifetime: the fall of the Iron Curtain, the end of apartheid in South Africa and a stop to the violent Troubles in Northern Ireland. Happily, all three came to pass.

The fall of the Berlin Wall 30 years ago tomorrow triggered the most fundamental change in Europe since the second World War. Within months it saw the re-unification of Germany after almost 50 years of separate existence. However, while Germany was reunited in 1990, with positive economic outcomes, some fault lines from the past are still apparent.

The strategy to bring about a unified country put major emphasis on rebuilding the run-down infrastructure of the east. In the early years, when infrastructural investment was massively ramped up, it was mainly financed by borrowing, so that West Germans did not immediately feel the costs involved.

However, the massive transfer of resources from west to east to help build the economic success story came, after the initial couple of years, from the pockets of the better-off westerners.

Regional development in the old East Germany over the past 30 years has been a major success story compared to regional outcomes in Poland, Italy and the UK over the same period.

From a starting point of 43 per cent of West German GDP per capita at the fall of the Berlin Wall, the former East Germany reached 74 per cent of the level by 2017. This reflects a very large rise in productivity over the period, as communist-era businesses closed and were replaced by new enterprises.

All the former communist institutions closed, and many public servants in the east lost their jobs. A large part of the existing East German industry was uncompetitive and was shut down, leading to a major rise in unemployment. In return for this difficult medicine, East German workers saw a rise in wage rates, and the West German welfare system eased the problem for the unemployed. However, employment in the east fell by 23 per cent between 1989 and 1991.

Unemployment in the east, having been close to zero under the Communist regime, grew steadily and reached a peak in 2000 of more than 20 per cent. Many of those who lost their jobs in the early years, especially the most skilled, emigrated to the west.

Net emigration between 1989 and 2002 amounted to some 1.3 million people or 7.5 per cent of the original population. Because many of those who left were younger and better educated than the population as a whole, such emigration had a negative effect on eastern society generally, and on its productivity.

Berlin has been an exception to the more sluggish economic performance of the former east, and Derek Scally has reported on the pressures that its rapid growth has created on housing supply and rents.

A mark of its gentrification has been that graduates now form more than half of Berlin’s population aged 30 to 34, up from 36 per cent in 2000.

Outside of Berlin, educational attainment has remained stagnant in the former east, where under 30 per cent of 30 year olds have degrees. This difference helps explain the continuing productivity deficit in the east.

While the corner has been turned on eastern unemployment, which has fallen from its peak of 20 per cent-plus to just 5 per cent today, lower eastern productivity results in continuing divergences in living standards. Many in the east feel economic progress for them has been much too slow.

This is reflected in very different patterns of voting behaviour in the east and west. The right-wing AfD enjoys much more support in the former east than it does in the west. By contrast, the Greens enjoy considerable popularity in the west but have a small support base in the east.

Breaking up a country is relatively easy but, like Humpty Dumpty, putting it together again is much more challenging.