Brexit, Turkey and Boeing blamed as State sets out tourism plan for 2020 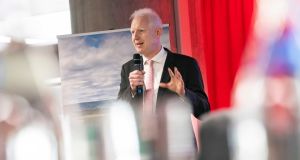 Fáilte Ireland, the Republic’s tourism authority, has blamed myriad factors including Brexit, the re-emergence of Turkey as a competitor destination, and the grounding of Boeing 737 Max aircraft for a “softening” of the sector in 2019.

It has set out a five-point plan to help tourism through the next year after the latest data showed the number of holiday trips to the State is down 1.1 per cent so far this year. Domestic trips are down 2 per cent. The authority’s business sentiment index, which tracks industry optimism, has also just moved into negative territory after an eight-year expansion.

The assistance measures planned include €12 million to develop new visitor attractions, and a €6 million marketing campaign to tempt domestic tourists and visitors from the North. The ad campaign will be themed “Keep Discovering”.

The plans also include the establishment of a new Brexit-focused development directorate within the agency. In addition, about €500,000 will be spent on a marketing campaign to attract workers into the industry, including a new online portal tourismcareers.ie. It will also draft more local plans to boost tourism in regional areas.

Fáilte Ireland and Government officials were in Croke Park on Monday morning to announce the 2020 plans in front of 600 attendees at its conference. Paul Kelly, Fáilte Ireland’s chief executive, said 2020 would be a “challenging” year after a “mixed” 2019.

“Our latest research shows that business sentiment is down, fuelled by rising costs and low-priced competition,” said Mr Kelly.

Although Brexit’s impact on the sterling-euro exchange rate had the biggest impact in 2019, Mr Kelly specifically cited challenges from Turkish competition and the damage to the aviation industry caused by safety worries over the Boeing Max aircraft.

He also cited challenges in the Asian market caused by unrest in Hong Kong, and the scaling back of some direct routes between Dublin and China.

“In corporate travel the length of stay has also gone down significantly,” he said, adding that many business visitors to Dublin now fly in for day trips instead of staying overnight as before.

The average level of cash spent by tourists who travel here to visit friends and family has also declined “significantly”, he said. Fáilte Ireland believes this is because many of these visitors now come from eastern European countries with lower spending capacity.

“But while the threats are real, so are the opportunities,” said Mr Kelly.

He said that despite the challenges it was still predicting growth in tourism visitor numbers in 2020 of about 1.7 per cent, including a plan to regain all of 2 per cent lost in domestic visitors.

With a hoped-for increase of 1.3 per cent in overall visitor numbers, helped along by its five-point assistance plan, Fáilte Ireland envisages that total revenues in the sector could still climb by 2.5 per cent in 2020.