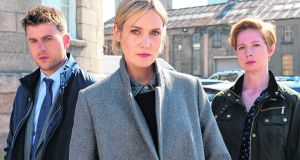 Taken Down: A crime drama with sharp things to say about the direct provision system. Photograph: Bernard Walsh

In 2018, RTÉ broadcast Taken Down, a crime drama with sharp things to say about the direct provision system for asylum seekers that this Government chooses not to change. The drama, commissioned from an Irish production company, was compelling but utterly grim viewing. That was the point.

Some of us still watch, or want to watch, Irish television. But amid the furore about RTÉ proposing cutbacks exactly like the Government asked it to do, it seems entirely possible that we might look back on Taken Down as one of the last times RTÉ could afford to pay for a grown-up drama made by Irish people about Irish society and aimed primarily at an Irish audience.

We now let the British make the majority of “our” television because this is, after all, cheaper.

What Fine Gael wants is not a public-service broadcaster with responsibilities to the public, but a meek, cowed and propagandist broadcaster

Politicians are fine with this because they haven’t noticed it. They only watch television on which they or their frenemies are likely to appear. They see RTÉ only as its news and current affairs division and get annoyed when RTÉ doesn’t fall over itself to assuage their egos.

This “f***ing RTÉ” attitude has been spelled out in clear terms to Irish Times Political Editor Pat Leahy. What Fine Gael wants is not a public-service broadcaster with responsibilities to the public, but a meek, cowed and propagandist broadcaster, much like the state ones they have in countries we think we’re better than. What Ministers really don’t like is RTÉ’s tone.

They’re not willing to take any responsibility for the ephemeral, intangible gutting of Irish culture, because, once again, they haven’t spotted it.

In fairness to Minister for Communications Richard Bruton, he is also Minister for Climate Action. He hasn’t got the spare diary to sit down with the production industry, represented by Screen Producers Ireland, which has seen its members endure a halving of their commissions from the “national” broadcaster.

Last summer the Minister seemed reluctant to take ownership of any redundancies that might take place at RTÉ. Last week he welcomed the work the broadcaster had done in developing its plan, which aims for 200 redundancies. This is progress, I guess, though you would be hard pushed to describe it as the kind of support anyone wants.

Licence fee reform? After eight years of nothing, it’s been pencilled in for about seven years from now

What of Minister for Culture Josepha Madigan? At her post-budget press conference, Madigan reiterated the Government’s paper ambition for the State to become a “global hub” for film and television, with a doubling of the workforce. But when questioned about how the industry could achieve this fantasy without the leverage of a functioning RTÉ, there was little joy. “There is a strategy in place to deliver the outcomes,” assured Madigan, safe in the knowledge that RTÉ is not her responsibility.

How about Minister for Finance Paschal Donohoe? He’s a cultured man. Any change out of him? Unsurprisingly, his budget of Brexit-countering measures didn’t stretch as far as the Irish media. Does that mean the Irish media is immune from the economic impact of Brexit? Alas, no.

Licence fee reform? After eight years of nothing, it’s been pencilled in for about seven years from now. According to Minister for Business, Enterprise and Innovation Heather Humphreys, “there have been a number of measures” to date to fix outdated, unenforced public media funding law. No measures have been implemented, though, have they? They remain very much at the draft script stage.

What we have instead are platitudes about public-service broadcasting that are repeated more times than Father Ted. Increasingly, they are interrupted with the barely private complaint that we’re bored of this Montrose whingeing.

It now looks as if RTÉ was tactically naive to even raise the issue of high licence fee evasion rates, as Ministers are using those same high evasion rates to argue it would be unfair and ridiculous to increase the rate of the licence fee.

Never mind that feted Irish directors Lenny Abrahamson, Neil Jordan, Dearbhla Walsh and Jim Sheridan, along with the rest of the Screen Directors Guild of Ireland, have pleaded with the Government to “fix the dysfunction of funding to RTÉ”. Television, it seems, is neither recognised as “the arts”, which this Government is also rubbish at supporting, nor as an industry capable of generating returns.

Ultimately it doesn’t matter how many more acres of land it sells in a valiant bid to upgrade the RTÉ Player. RTÉ won’t ever possess the shininess of Californian technology companies, upon which a tray of tax kindnesses are bestowed so they can continue their fine work in conquering the globe and hollowing out the unprotected Irish creative and media industries in the process.

This brings us to Prime Time, an RTÉ programme, which last Thursday featured an underwhelming cameo from Patrick O’Donovan, a Minister of State at the Department of Finance. O’Donovan gamely pondered why RTÉ had failed to raise commercial revenue in the manner of other semi-States since the recession, forgetting about the existence of Google, Facebook, Netflix and the internet in general. If you watched closely, you could almost see the light going out of David McCullagh’s eyes.

Still, the new party line was revealing. Market shifts are confusing to this Government. It doesn’t bode well for its handling of, well, anything.