Brexiteers prove that stupid is as stupid does

Chris Johns: Brexit leaders are so dim, they haven’t noticed their stated negotiating principles have already changed since article 50 was triggered 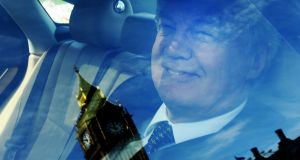 “The Brexiteers are so dim, so wedded to platitudes and simple slogans that they didn’t notice.” Above, UK Brexit secretary David Davis. Photograph: Andy Rain/EPA

Britain’s Brexit strategy has begun to unravel, less than a week after it was launched. How did it come to this? Why are the individuals charged with organising the UK’s EU departure so singularly unsuited to their roles? In part, it is because they are both under- and overeducated.

Getting a job has always been more important than getting an education. We pretend that the latter will always lead to the former but what we really mean is that a particular type of education, often quite narrowly defined, will lead to more money or power. Or preferably both.

These days kids are being advised to become coders in order to avoid being ostracised as bankers or replaced by robots. This, in turn, kicks off a debate as old as formal education: what’s the point of an arts degree? If you have to ask, then you will never understand the answer.

The primary purpose of education is presumed to be the equipping of the individual for a lucrative career. To avoid accusations of philistinism we pretend to value education for its own sake, but we rarely mean it.

The fretting over employment prospects isn’t helped by the signals often sent by employers over the criteria they use to select candidates. Sometimes employers are themselves hopelessly confused about how to hire.

The sort of things that often go along with both success – effectiveness – and job satisfaction rarely have much to do with Leaving Cert points or a first-class honours in something or other. The brutal truth for our children is that there are hundreds of millions of other kids in this globalised world with more and better formal qualifications. If you really want to do the competitive thing you need all those certificates plus a host of other things, not least of which is luck.

Sometimes the obvious is ignored: things we know to be trivially true we nonetheless don’t pay enough attention to. But the “soft” drivers of career success are neglected at their peril. Indeed, as someone who has hired people with an implausibly large collection of degrees and professional fellowships, I suggest the following list of key, but unteachable, drivers of career progression.

Insatiable curiosity; turn up on time; deliver on your promises; don’t be disorganised; be capable of reading something from beginning to end, displaying some sense of comprehension, some ability to retain at least some of what you have read; pay attention, particularly to details. Find a way of showing that you know how to think and how to understand other people.

The clearest example of a group of seemingly educated but actually inauthentic, unserious people is to be found in the current British cabinet

These days, everyone knows what to say at interview, just as they know how to pass exams. To be authentic, rather than just another credential-rich but education-poor member of a cast of thousands, you have to know what the words coming out of your mouth actually mean. If you can make a reasonable fist of all of these key success factors you will be very different from all of those other app developers – or ministers for Brexit – out there. So, be serious rather than superficial.

Which brings us to the point of all of this. The clearest example of a group of seemingly educated but actually inauthentic, unserious people is to be found in the current British cabinet. With Oxford and Cambridge degrees in abundance, Brexiteers are, on a daily basis, displaying their superficial approach to everything, incapable of paying attention to detail, clearly don’t read anything and are not devoting any thought to what happens when they fail to deliver on their promises. Instead, they mouth platitudes; they promise that crashing out of the EU with no deal will be a good outcome; and they threaten war with Spain over Gibraltar.

The mention of war laid bare the Brexiteers’ complete lack of knowledge of European history, the total lack of awareness that Europe has a hundred, maybe thousands of Gibraltar-like tensions. Gibraltar’s “constructive ambiguity” is replicated in so many different ways around the EU. This is why the EU exists: to make sure that none of these points of tension ever becomes a flashpoint for the nastiness that characterised Europe’s history. Another obvious example is the border on this island: Europe has rendered it invisible. Brexit places it front and centre.

Everyone in Europe apart from the Brexiteers understands all this, which is why the EU is determined that the UK must be made worse off as a result of Brexit. It’s not punishment or petulance but logical, clear thinking. Faced with an opponent who had clearly thought out their objectives and strategy, the Brexiteers have begun their long retreat from the bully pulpit.

Think about that. Less than a week since the article 50 letter first established the UK’s negotiating principles, they are being changed

And here was the big surprise: Theresa May this week took advantage of a visit to Saudi Arabia and a parliamentary recess to start softening the UK’s “rock hard” Brexit stance. This was inevitable but nobody expected it quite so soon. But it’s what happens when you are astonished to find serious, authentic people across the negotiating table from you who do little else but pay attention to detail and think very clearly about both their objectives and how to achieve them, and are organised and fully intend to deliver on their promises. All the things you are not.

Think about that. Less than a week since the article 50 letter first established the UK’s negotiating principles, they are being changed. The Brexiteers are so dim, so wedded to platitudes and simple slogans that they didn’t notice. They don’t do details. Stupid is as stupid does: overeducated doesn’t begin to capture it. If they were ordinary employees who had somehow fluked a job in a well-run business, they wouldn’t make it past their probation period.

6 Irish whiskey sales near milestone of 12m cases a year