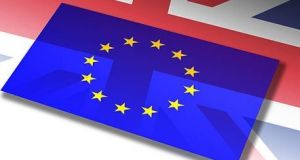 The fact the British government and various EU institutions have acknowledged their responsibility to protect the Belfast Agreement in the Brexit talks is welcome, but it is now time to focus on how that can best be done

We need to renegotiate some aspects of the Belfast Agreement, and we need to do it this summer. At an event for global public policy staff at Twitter’s Dublin HQ this week, and again in testimony before the Oireachtas Committee on Brexit, Bertie Ahern, one of the key architects of the Belfast Agreement, argued there existed a short window in which Ireland could best mitigate the impact of Brexit on the agreement, and talks on the necessary revisions should begin immediately.

Importantly, the “we” who he said needed to renegotiate the agreement were the British and Irish governments.

Ahern said the issues touching on the agreement which arise from Brexit were too important to Ireland for them to be left to the wider Brexit negotiations between Britain and the 27 EU states.

In this view he echoes an argument many of us have been making for months: there are some aspects of the Brexit fallout which require a British-Irish strand and direct talks between our two governments.

The fact that the British government and the various EU institutions have acknowledged their responsibility to protect the Belfast Agreement in the Brexit talks is welcome, but it is now time to focus on how that can best be done.

We should now call the EU, and, indeed, Theresa May’s government on their fine words by insisting on conducting these bilateral talks on the implications for the Belfast Agreement, and doing this before the full engagement on the wider Brexit talks begins in the autumn.

The Government and our diplomatic service are to be praised for raising consciousness about the need to protect the Belfast Agreement and putting such concerns high in the Brexit priorities.

It is now time to bring that to its logical conclusion by letting the two countries that negotiated the Belfast Agreement to engage together on resolving the implications which arise.

The EU has been described as a cornerstone of the Belfast Agreement. This is more than just constitutional flannel. The agreement specifically provides, under stand 2, article 17, for the North-South Ministerial Council to facilitate co-operation and co-ordination in EU matters. The council’s remit in this area would clearly be altered by the UK’s exit from the EU.

The agreement also provided for six new bodies operating on an all-island or cross-Border level. One of these new agencies, Special EU Programmes Body, deals with funding, and will obviously be defunct after Brexit.

Apart from these institutional alterations, significant implications would also flow from a British decision to abandon the European Convention on Human Rights.

In the chapter in the agreement dedicated to “rights, safeguards and equality of opportunity”, the UK government undertook to complete the incorporation into Northern Ireland law of the European Convention of Human Rights. The commitment was honoured in the text of the 1998 UK Human Rights Act but Britain is now likely to reverse that legislation soon.

This framing of elements of the Belfast Agreement within the context of our two nations being members of the EU and the prominence given to North-South and east-west engagement on European policy issues was not accidental. It was seen by the Irish Government as crucial. It was a triangulation strategy designed to take the edge off the binary dimensions of nationalist-unionists and Irish-British concerns and concessions.

The prominence given to the EU dimension, alongside the decision to register the Belfast Agreement as a binding international treaty with the United Nations, was primarily at the insistence of the Irish Government anxious to underwrite the concessions secured into international law.

No one imagined when the agreement was negotiated in 1998 that Britain would one day leave the EU, but Brexit is a circumstance where the European and international dimension to the Belfast Agreement are likely to matter.

There is much to talk about as a result, and every reason this talking should be done directly between those who live on these islands.

1 Murdered and mutilated: Keane Mulready-Woods and the teenagers of gangland
2 Cork student fatally stabbed in the neck at house party named
3 Patrick Freyne: The mystery of Dermot Bannon and his many surrogate wives
4 Thousands of teachers to strike on February 4th
5 Who was murdered teenager Keane Mulready-Woods?
Real news has value SUBSCRIBE