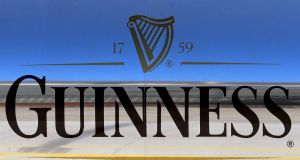 Guinness is pumped into tanker trucks and carried 165km north to Belfast.

The story of Guinness exports shows the potential cost of the UK’s decision to leave the European Union.

Brewed at St James’s Gate in Dublin, what’s in almost every bottle and can of the stout crosses the Border twice before reaching beer drinkers.

Ingredients from all over Ireland arrive in Dublin, where the water, barley, hops and yeast are mixed and brewed. The beer is then pumped into tanker trucks and carried 165km north to Belfast. There, it’s bottled and canned before being sent back South for distribution.

Guinness highlights the concern over what happens to Britain’s only land Border with the EU. While politicians and diplomats in Dublin, London and Brussels insist there will be no return to a hard Border, the reality may be more complicated. EU leaders are scheduled to hold a summit on April 29th to pave the way for two years of Brexit talks.

“For me, there’s no question, there has to be some sort of customs visibility on either side of the border,” said Robert Murphy, a former customs official at the Irish tax authority who later worked at the European Commission in Brussels. “The idea of having a seamless and frictionless border is lovely, but I do wonder how realistic it is.”

Cross-Border trade is worth more than €3 billion a year. For London-based Diageo Plc, the owner of Guinness, it means the company’s trucks can head North and South unencumbered.

Each year, they make 13,000 beer-related Border crossings in Ireland. Add in Baileys, the whiskey and cream-based liqueur, and the number rises to more than 18,000. A hard Border could cause delays of between 30 minutes and an hour, costing an extra €100 for each journey, the company said. That alone would add €1.3 million to the cost of Guinness and other beers Diageo produces in Ireland.

Brexit could cut trade flows between Ireland and the UK by as much as a fifth, the Economic and Social Research Institute (ESRI) estimated. In draft guidelines for negotiating the UK’s exit, EU president Donald Tusk said “flexible and imaginative solutions” will be needed to avoid a hard Border.

“For big companies like Diageo and brands like Guinness, there might be solutions, whether that be electronic tagging or some sort of trusted trader programme,” said Murphy. “Customs officers don’t want to waste people’s time. But it’s not going to be easy.”