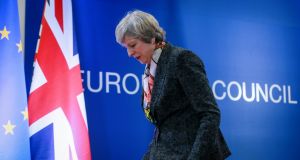 Theresa May: It is bizarre that her pursuit of a hard Brexit is not seen as the biggest mistake of her premiership to date. Photograph: EPA

It is with much astonishment that we learn “the biggest mistake of Theresa May’s premiership to date” was not the plan to pursue hard Brexit at any economic cost. No, the worst decision was a rise in national insurance contributions (the UK version of PRSI) for the self-employed.

The British tax system is sometimes the mirror image of our own. We impose a heavier burden on the self employed compared to the the PAYE sector. The UK does the opposite, letting the entrepreneurial classes (or ‘White Van Man’) off lightly compared to regular workers. At least until now.

The details don’t really matter. A UK tax went up and the howls of protest have led to a climb down. That’s how it goes these days, at least in the English-speaking world: taxes can only ever go up in the teeth of a crisis or a war.

Economic policy is always about tough choices. Europe has a history of favouring politics over economics. When it comes to Brexit, the British now want them to do the opposite. Scottish economics suggests keeping the union, politics may yet provoke a split: latest opinion polls show rising support for independence. And for Ireland a dark question looms: do we have to choose between peace or prosperity?

Why raise UK taxes now? The economy is doing better, with the first positive revision to the fiscal outlook in a while. Surely the UK chancellor should give rather than take? The tax rise actually made strategic sense, even if it was a bit off both politically and tactically. The NHS funding crisis is a foretaste of demographic problems to come. The gig economy implies rising self employment with an implied cost to the exchequer if tax favours the non-PAYE worker. Raising national insurance in the way proposed is actually terribly progressive: the better off pay the most. But, like the debate over our own USC, sensible economics get overwhelmed by the politics.

Across the Atlantic, we see another example how fiscal policy making, perhaps any kind of policy making, is fundamentally broken, probably beyond repair. The leader of the House of Representatives, Paul Ryan, this week introduced a tax cut for rich people disguised as the Republican Party’s replacement of Obamacare. In a presentation describing his new healthcare plan, Ryan said the fundamental problem with the existing system of health insurance was the fact that ‘healthy people end up paying for the care of sick people’.

Ryan is often described as a ‘policy wonk’, somebody immersed in the arcane details of government, somebody who knows their way around the mind-numbing complexities of economic policies. He clearly doesn’t understand how insurance (of any kind, let alone healthcare) is supposed to work. I am reminded of Paul Krugman’s repeated labelling of Ryan as both a phoney and a fraud. I used to think this was a touch partisan, a tad OTT when it came to the Republican leader. Ryan has just demonstrated how spot-on were Krugman’s arguments.

Our own fiscal debates aren’t much better and, for the most part, are focused on one issue only: water charges. Compared to the questions that will be asked of us in the years ahead, this is not just a trivial matter but also one that reveals a total lack of seriousness. Or perhaps it’s our inability to do simple arithmetic.

What if Tony Blair and countless others are right: Brexit and the restoration of a hard border on this island takes risks with the peace process? We are also told that our future prosperity depends on continued membership of the EU. If we accept both propositions there is presumably a case for choosing one or the other. Which risks do we want to run with, which to avoid? Risk the peace or risk prosperity? Let’s talk about water charges instead.

Taxes can never be raised and serious policy is too hard to bother with. Perhaps the best way to deal with all of this, domestically at least, is to finally admit the inescapable logic of Irish reunification. A reconstituted border makes about as much sense as the Republic leaving the EU. The way to avoid this most awful of dilemmas is to explain to Northern Unionists that their economic future looks far rosier in the EU rather than outside and the only way to achieve that is to accept Irish reunification. Economics over politics again, perhaps, but the logic of this looks awfully compelling to me. And the way elections are going in the North it doesn’t look like we have to persuade too many people of the economics. Maybe even the politics will swing towards Irish unity: English nationalism is getting uglier by the day with people such as Michael Gove introducing a sectarian dimension to the Brexit debate. Take a look at his recent bizarre comments in the London Times congratulating Theresa May on becoming the first Catholic British prime minister.

Irish unity will, of course, also have a rather large fiscal dimension. Just how large is matter of fierce debate: but it’s a big number. A large bill will come the Irish taxpayers’ way. Another set of tough and unpalatable choices. Brussels will be sympathetic but rather short of cash once the Brits leave.

Like the Americans and the British, we have shown a fatal incapacity to either raise taxes in peace time or reform our tax system at any time. Until the next crisis then: as far as I can see there is nothing in the Belfast agreement that allows us to back out of an agreed reunification simply because we can’t afford it.