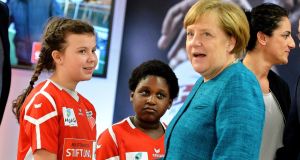 Dr Merkel’s support will be crucial if final Brexit treaty is to carry over provisions in Belfast Agreement that allow Northern Ireland’s accession to EU in case of Irish unity. Photograph: Sascha Steinbach/EPA

Taoiseach Enda Kenny meets German chancellor Angela Merkel on Thursday in Berlin to discuss the complex negotiations ahead and to press Irish concerns regarding the Border.

“These concerns don’t just play a role but a prominent role on the order of business,” said Gunther Krichbaum, an MP for the ruling Christian Democratic Union (CDU) party and chairman of the Bundestag’s influential European affairs committee.

Mr Krichbaum said the last decades of peace in Northern Ireland were also a European achievement, but were “anything but self-evident”.

“We have to give everything to ensure that future remains stable,” he said.

Mr Kenny last visited Berlin in July 2016, just weeks after the Brexit vote, in an initial push to make the Irish case. After two follow-up meetings of the governments’ respective Brexit teams, in Berlin and Dublin, those lobbying efforts paid off last week when a draft European Council paper made explicit reference to Ireland’s Brexit concerns over the peace process, the Border and the Common Travel Area.

Given this progress on the EU negotiating paper, to be agreed formally at a special European Council meeting on April 29th, Irish officials are cautiously optimistic that the German leader will be more vocal on Thursday in her public support for the Irish cause.

After their July meeting, Dr Merkel stressed how “absolutely important” Ireland’s concerns were, but said “the Irish voice will be heard as much as anyone else’s” in talks.

Since then Mr Kenny has stepped up his lobbying efforts, calling for any final Brexit treaty to carry over provisions in the 1998 Belfast Agreement that allow Northern Ireland’s accession to the EU in the case of Irish unity.

In this he has secured support of key European officials, citing the precedent of East Germany’s accession to the EU on German unity in 1990. But the support of Dr Merkel, as leader of the largest EU member state and as a former East German citizen, will be crucial on this point.

German officials are largely happy with the EU’s draft negotiating blueprint and are well informed about Irish concerns, which they have flagged alongside other early priorities: preserving existing rights of EU and British citizens and prioritising the exit talks over any future EU-UK deal.

But German officials warn that talks will be extremely complicated, prompting German analysts to note that while Berlin identifying Northern Ireland as a crucial issue is one thing, acting on it is another matter.

“I’m not sure what that means in practice,” said Christian Odendahl, chief economist and Berlin representative of the Centre for European Reform. “A German government will always be reluctant to get involved in others’ internal politics, [and] that goes for Northern Ireland as well as Scotland.”

Ahead of meeting Dr Merkel, Mr Kenny attends an Enterprise Ireland event in Frankfurt, and on Friday in Berlin he will meet German business leaders, think tank analysts and attend a Bord Bia event.