Brexiteers fight migration battle they could have won under EU rules 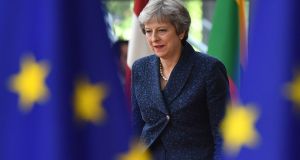 In normal times, the Conservative Party was often described as being somewhat well-disposed towards business. It can be a double-edged sword: opponents criticise the Tories for being pro-business at the expense of ordinary workers. So it’s not something that is sung from the rooftops but it is nonetheless at the heart of Conservative values: when it comes to the economy, they are a safe pair of hands and will usually be protective of the interests of the business community.

So it came as something of a surprise when Boris Johnson, the foreign secretary, reportedly said “f*** business” when asked about the latest grumbling of various firms, all of whom complain that Brexit uncertainty is damaging and that the growing threat of a “no deal” Brexit threatens serious trouble ahead.

When a leading cabinet minister trashes a core party belief, it is a big deal. But, in these less than normal times, nothing happened. A different prime minister in a different era would have sacked Johnson. The absence of any sanction came as no surprise: it was the latest in a long list of similar offences, another opportunity missed to discipline an errant minister. Yet another reminder of the desperately weak position of the UK’s prime minister.

In another much-repeated pattern, Theresa May went to Brussels for another Brexit crunch summit. She found EU leaders more interested in other matters, mostly immigration-related. Ms May was asked if she had anything new to say and was greeted with quiet sighs of exasperation when she revealed she did not.

The EU’s preoccupation with immigration is ironic: lots of things drove the British to vote to leave, but the most important, according to most of the evidence, was migration. It is, perhaps, the defining global issue of the modern era.

One of the many Brexit puzzles revolves around Theresa May’s tenure as home secretary: during that time, immigration targets (unrealistically low) were introduced and no effective policies put in place to meet them. Nothing much was done to curb non-EU immigration, something wholly within the power of the UK government to do as it pleases.

Although free movement of people is one of the EU’s core beliefs, there is plenty of scope to tackle things such as “benefit tourism”.

The idea that there is mass migration to the UK to avail of the dole and the NHS is mostly a creation of the tabloid press. It would have been straightforward to tackle these imaginary problems by supplying the data that shows people move to the UK to work and pay taxes.

It would also have been easy to throw a bone to certain newspaper editors and proprietors via new rules to limit anyone entering the UK without a job, or the prospect of a job. It would have been easy and allowable under EU rules.

Discussion of borders, not just the Irish one, is clearly at the heart of Brexit. The reason why a lot of immigrants into Europe head to Calais in the hope of getting across the Channel into Britain is tied up with relative strengths of internal and external borders. The French external border is long and relatively weak. It’s quite an easy country to get into. But because of strong internal borders – or controls – it’s not that easy to get a job or avail of government services. The identity card system is an important factor here.

Britain is a tough country to get into – a strong external border – but once there it is relatively straightforward to disappear. The UK’s internal borders are weak. Work, in particular, is easy to get, often with few questions asked.

Freedom of movement of people will, in my view, be the issue that defines how Brexit actually happens. Right now, it is a red line for both sides. The negotiating gap is as wide as ever. The closing of this gap will determine the hardness of Brexit. If there is a single issue that causes the British to leave next March without any kind of deal, this will be the most likely cause.

There are, of course, other issues to worry about, including the worries of British business. A leading Brexiteer this week said that a no-deal Brexit is now desirable simply because that is the only route that doesn’t trigger the backstop agreement reached last December.

Brexiteers are worried that Theresa May sees the backstop as a permanent solution, one that keeps the UK in a sort of transition limbo. That members of the government can now say they desire an ultra-hard Brexit speaks to the febrile state of British politics and the risks that lie ahead.

Brussels insiders reckon all of this will go the wire: perhaps as late as December or even another emergency summit in January. There are worries that an earlier deal – if one could be reached – would simply be unpicked by the various factions in the UK.

But if that deal is to be done, a compromise on freedom of movement will be necessary. And it will involve the UK availing of rules that have always been there. I expect headlines to proclaim a “new” world whereby immigration will only be allowed by holders of job offers.