Austerity and short-termism is jeopardising our future

Businesses are like governments: cutting investment for instant cashflow savings 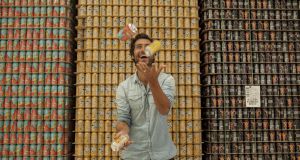 Logan Plant, son of Led Zeppelin singer, Robert, is a craft brewer. He recently bemoaned the short-termism of potential private equity investors, taking instead a £40 million (€45.5 million) cash injection from the makers of Heineken, commenting that they understood the business and would let him develop and grow it.

He also professed an allergy to a stock market listing. It’s a wise strategy. The biggest puzzle facing policymakers is the lack of productivity growth in just about every major economy.

It’s not the only conundrum – the failure of robust wage growth to make a reappearance is a constant source of bewilderment. It could be that both are linked: labour is relatively cheap so firms don’t have to be bothered much with investment or innovation.

It is likely that deeper forces are at work. Three (related) suspects are short-termism, cost-cutting and risk aversion.

That stock market participants have become more short-term in their outlook is well documented. The average holding period for an investment in equities used to be months or years. Today, thanks in part to the emergence of high frequency trading, it is measured in milliseconds. Investments in supposedly long-term securities last for fractions of a second. Any sensible investment advisor always says that if your holding period is likely to be less than a number of years, the stock market is not for you. This age-old wisdom has to confront the simple truth that many investors don’t behave in this way.

Managers are only human and respond to incentives. Either via stock options or fear of losing their job, the incentives they face mean they have to look after the share price. This means that, despite knowing it is nonsense, they have to keep one eye on the tyranny of the quarterly reporting season. Strategic business decisions are all too often made with the stock market in mind.

Lip service is always paid to long-term thinking and the importance of spending for growth. But behaviour can contrast with the rhetoric. Just as many businesses always say they put the customer first, the reality is somewhat different.

The tenure of senior executives has become shorter: long-term decisions a chief executive makes will often see results only long after he or she has shuffled off the stage. It is the remarkable individual who sacrifices the short-term gains on their watch in favour of benefits that only their successors will benefit from.

Managers are too often punished for taking risk. That’s partly short-termism again but it is also a deeper point. It’s a kind of paradox: investors have become more averse to companies taking investment decisions. Corporate investment – capital spending – involves spending money for an uncertain reward in the future. Equity markets have become obsessed with cashflow generation. Maximising cashflow – at the expense of long-term growth – means spending as little money as possible.

Some businesses have become a bit like governments: it’s all too easy to cut back on investment to make immediate cashflow savings.

With both governments and corporates not investing enough in growth, it is not surprising there isn’t very much of it around. It is worth reminding ourselves that Ireland’s high rate of growth is a global anomaly.

The reward to successful investment is sometimes described as “my ship came in”. These days, in many countries, we seem surprised at the absence of returning boats despite the fact that we never sent them out in the first place.

The pressure to generate cash isn’t just about capital investment. Many companies have annual (but always described as one-off) rounds of cost cutting, involving redundancies and budget cuts. The easiest way to generate immediate cash is to cut spending. And some businesses have lost sight of the old adage that there is a difference between cutting fat and cutting into bone. When the fabric of a business is damaged by incessant cost cutting it is no surprise that the health of the enterprise suffers. It ceases to grow as it should and doesn’t make much of a contribution to productivity statistics.There is a generation of managers who have risen to the top on the back of their reputation as cost cutters. It’s a funny kind of achievement.

Cost cutting is most obviously seen in the relationship between some banks, utility companies, outsourced government agencies and their customers. The horror we experience when we try to interact with these businesses speaks to years of under-investment.

Not all businesses are obsessed with cost cutting. The tech giants are examples of companies that take risks and spend to achieve growth. But there is evidence that one unintended consequence of ultra low interest rates – easy money – has been to allow “zombie” companies to survive.

There is a piece of jargon that captures ultra short-termism: hyperbolic discounting. We need to become less hyperbolic and spend more on our futures. To that end, the capital spending plans of the Government and the sensible expectations of management for this year’s budget are welcome.

Germany’s recent concession to France on a euro zone budget is also welcome; the resistance of smaller countries is not. Fiscal austerity has become a fetish that jeopardises the economic future.