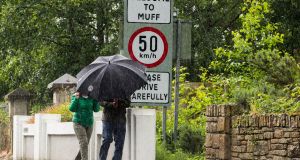 The Border town of Muff, Co Donegal. Kieran McQuinn of the ESRI said the “worst possible outcome” on Brexit would be to have a contractionary budget under a scenario of a hard Brexit. Photograph: Liam McBurney/PA Wire

Brexit is already having a direct impact on the Republic’s economy as consumers are more cautious about spending than would normally be expected against the backdrop of an unemployment rate at its lowest rate since 2005 and rising wages, according to the Economic and Social Research Institute (ESRI).

ESRI research officer Conor O’Toole noted to reporters ahead of the publication of the institute’s latest quarterly economic commentary on Thursday that while consumer sentiment has fallen of a cliff this year, personal consumption remains pretty healthy and is expected to grow by 2.5 per cent for 2019 as a whole, down only marginally from 3 per cent last year.

“It does suggest that consumption would have been higher, had these uncertainties [surrounding Brexit] been absent,” said Mr O’Toole, adding that investment by businesses has also been slowing since late last year.

However, the ESRI has increased its full-year economic growth forecasts – measured by gross domestic product (GDP) – to 4 per cent from 3.8 per cent, helped by slight improvements in its outlook for Government and consumer spending, while leaving its 2020 projection unchanged at 3.2 per cent. The estimates are based on a scenario that the UK will leave the European Union this year with a trading status that remains equivalent to that of a full member of the union.

Even though personal consumption and business expenditure are running below where they might be if Brexit were not clouding sentiment, the Irish economy “appears to be operating at its full potential level,” according to the ESRI.

“The continued strong performance of the labour market has resulted in a significant increase in both nominal and real wages in recent years,” it said. “While wage increases due to productivity are warranted, care must be exercised to ensure that the competitiveness of the domestic economy is maintained.”

The ESRI said that it “may be advisable” for the Government to take money out of the economy next year as the Government is currently on track to run small budget deficits in 2019 and 2020.

However, ESRI research professor Kieran McQuinn noted that the “worst possible outcome” would be to have a contractionary budget under a scenario of a hard Brexit. Budget 2020 is set to be unveiled by Minister for Finance Paschal Donohoe on October 8th, a little over three weeks before Brexit is currently scheduled to take effect.

The ESRI also warned that the Government must ensure that large infrastructural projects, which are essential for sustainable economic growth, are delivered “on an efficient basis”.

“A number of high-profile cases have emerged recently where the final costs of certain projects seem to be significantly different from initial estimates,” it said in the report.

Rising costs associated with the national children’s hospital and the national broadband plan have dominated political discourse in recent months.

“Given the pace of growth in the economy at present, increases in expenditure must focus on capital projects that increase the productive capacity of the economy,” it said.