Official figures show Irish households have fallen to fifth position. But it’s not that simple 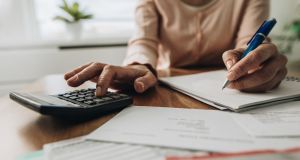 Official figures published late last week by the Central Bank show that Irish households have fallen to fifth position among the most indebted in Europe, having dipped below the UK. Denmark, Netherlands and Sweden continue to top the table.

Irish household debt stood at €137.5 billion, or 123.5 per cent of disposable income, at the end of last year – well off the peak of 2011 at the height of the financial crisis. However, the ratio, it has to be said, still stood at more than double where it was in 2004.

However, Davy economist Conall MacCoille cautioned in a note to clients on Monday against getting carried away. The rate at which Irish household indebtedness has slumped in recent years has been flattered by the statistical treatment of non-performing loans that have been sold by the banks to clean up their balance sheets.

“Household debt is calculated according to its ‘market value’, so the headline figures have been written down as non-performing loans have been sold by Irish banks at a discount, typically circa 40-60 per cent,” said MacCoille.

The discounts, however, have not been fully passed through to borrowers in arrears, he noted.

“From the perspective of the borrower, Irish household debt levels are probably still higher than in the UK, with larger numbers of mortgage accounts [in the Republic] in financial distress,” he concluded.