Fed downgrades its description of the health of the US economy 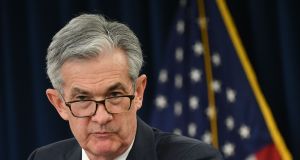 Federal Reserve chairman Jay Powell: the Fed noted that inflation continued to run below its 2% target

The Federal Reserve held interest rates steady but shifted towards a more dovish stance and pointed to possible interest rate cuts in the future, citing rising “uncertainties” about the economic outlook.

At the end of a two-day meeting marked by concerns about slowing growth and rising trade tensions, the Fed said it would “act as appropriate to sustain the expansion” and would “closely monitor the implications of incoming information for the economic outlook”.

This marked a change compared with previous language in which the Fed said it would simply be “patient” in determining changes to interest rate policy. The Fed also downgraded its description of the health of the US economy, saying activity was rising at a “moderate rate” – a less rosy picture than the “solid rate” of expansion it saw in May – and noted that inflation continued to run below its 2 per cent target.

Yet even as the Fed set the stage for possible monetary stimulus, economic projections released by the US central bank along with its statement suggested that interest rate cuts could take time to happen – and may not occur before next year.

The median interest rate forecast of Fed officials showed no change for the rest of 2019, but a 25 basis point reduction next year compared with their previous projection of a 25 basis point increase in 2020. – Copyright The Financial Times Limited 2019