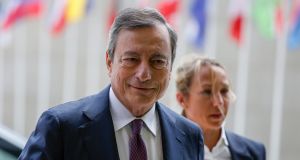 President of the European Central Bank Mario Draghi pointed the way to cuts in interest rates or new asset purchases if inflation does not return to target, weakening the euro, lowering European bond yields and pulling stock markets higher

Speaking at the ECB’s annual symposium in Sintra, Portugal, Mr Draghi said the bank had “considerable headroom” to launch a fresh expansion of its €2.6 trillion quantitative easing programme and suggested it could, in the short term, target inflation above its medium-term goal of just under 2 per cent for a limited period of time.

Banking stocks came under pressure, as the extended period of low ECB rates will continue to weigh on their profitability. In Dublin, AIB lost 0.7 per cent, while Bank of Ireland dipped 0.4 per cent.

The rally spread across the Atlantic with US government bond yields briefly plumbing new multiyear lows. The yield on the 10-year treasury note fell as much as seven basis points to 2.016 per cent, its lowest level since September 2017.

But the bond rally stalled after Donald Trump wrote on Twitter that he was to meet his Chinese counterpart Xi Jinping at a G-20 summit next week, raising hopes for an end to the Sino-American trade war.

The euro sank by about 0.5 per cent against the dollar, reaching a low of just under $1.12, while European equities rose – Germany’s Dax index was up by 2 per cent on the day.

In response, Mr Trump suggested that Europe was engaging in currency manipulation.

“Mario Draghi just announced more stimulus could come, which immediately dropped the euro against the dollar, making it unfairly easier for them to compete against the USA,” the US president wrote on Twitter. “They have been getting away with this for years, along with China and others.”

He also commented on the rise in European share prices, by tweeting: “German DAX way up due to stimulus remarks from Mario Draghi. Very unfair to the United States!”

The clash between Mr Trump and Mr Draghi comes as the US Federal Reserve prepares to discuss whether to cut interest rates in response to signs that the global trade war is hitting growth, with officials due to meet in Washington on Wednesday.

Mr Trump has expressed a clear preference for the Fed to cut interest rates, saying last week that the central bank was “very disruptive to us”.

It is not the first time Mr Trump and his administration have expressed concern about weakness in the euro. Early in his tenure, top White House trade adviser Peter Navarro said Germany used the euro to “exploit” the US.

Last month, the US treasury said that Germany, Ireland and Italy, all euro members, “merit close attention to their currency practices”. That placed them on a list alongside China, where a potential burst of fresh currency weakness is seen as a risk to already-strained trade talks.

Mr Draghi said indicators pointed to signs of “lingering softness” in the economy in the coming quarters, adding that if the outlook for inflation failed to improve then additional stimulus must be needed.

The bank could lower its policy interest rates – now at record lows of zero and minus 0.4 per cent. The ECB could also buy more government debt than previously thought by changing self-imposed rules that limit it to buying up to a third of any one sovereign’s debt, Mr Draghi said.

“If the crisis has shown anything, it is that we will use all the flexibility within our mandate to fulfil our mandate – and we will do so again to answer any challenges to price stability in the future,” he told the audience in Sintra. – Copyright The Financial Times Limited 2019