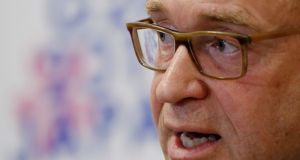 Jens Weidmann has softened his stance on some of the European Central Bank’s most controversial policies, in a bid to alleviate concerns about his suitability for the most powerful role in European economics.

The Bundesbank president has in the past opposed the ECB’s bond purchasing programmes, which were implemented during the region’s financial crisis to alleviate strains on the economy and financial system. But he told German weekly Die Zeit on Wednesday that the programmes fell within the central bank’s mandate.

His acknowledgment that bond-buying is a legitimate activity for the central bank comes as European leaders prepare to meet in Brussels to decide on a host of top EU jobs, including the presidencies of the European Commission and the ECB.

Mr Weidmann is seen as a frontrunner to replace Mario Draghi as ECB president later this year, but his dissent on several elements of the central bank’s crisis response has undermined his campaign in the eyes of southern member states, including Spain and Italy.

Yet his chances of securing the job are widely thought to be growing; Angela Merkel’s bid to secure Manfred Weber in the position of commission president has faltered, leading to suspicions that the German chancellor will focus her efforts on the ECB job. Germany is yet to hold the top role at the central bank.

In a clear bid to appease his critics, Mr Weidmann said on Wednesday that the ECB’s Outright Monetary Transactions Programme had been “determined to be legal” by the European Court of Justice. He added that it was “current policy”.

OMT was designed in the summer of 2012 to fulfil Mr Draghi’s pledge to do “whatever it takes” to save the euro zone from economic collapse. Mr Weidmann was the only member of the ECB’s 25-strong board to vote against the programme and angered top ECB officials when he appeared in the German constitutional court to argue against the OMT.

But he told Die Zeit on Wednesday that his “reasoning was not legal”.

“Of course, a central bank must act decisively in the worst-case scenario, but given its independence, there should be no doubt that it is acting within the framework of its mandate,” the Bundesbank president said, in an about-turn from his previous strong opposition to the policy.

In a clear reprimand of the Bundesbank president’s conduct, Mr Draghi said on Tuesday that some national central banks’ failure to communicate the ECB’s message to the public had helped to stoke the rise of anti-European populism. – Copyright The Financial Times Limited 2019