Shopping streets hit as consumer spending dips in May 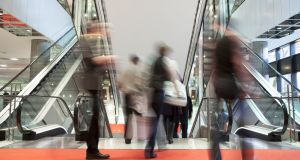 Household spending fell 1.4 per cent in May, the second time in 2019 that a reduction has been recorded a new survey has found.

Visa’s Irish Consumer Spending Index, produced by IHS Markit, showed a year-on-year decline for May, following a 1.2 per cent increase in spending in April.

The fall was driven by a 3 per cent decline in face-to-face spending, while ecommerce expenditure rose at its slowest rate in more than a year and a half, at 1.8 per cent.

“While the fall in Irish consumer spending has largely been driven by a poor performance on the high street, it seems that consumers are becoming more cautious of their purse strings as ecommerce also recorded a weakened rate of growth for the third successive month,” said Philip Konopik, Ireland country manager of Visa. “While some sectors did see a rise in spending, rates of expansion have slowed.”

The star performer of the sectors last month was household goods, which increased by 4.7 per cent. Consumer expenditure on hotels and restaurants was the slowest since August 2017 at 2.2 per cent.

Spending on food and beverages was 0.7 per cent down, while clothing and footwear fell 2.6 per cent compared with a year earlier. Transport and communication was also 2.6 per cent lower.

“Irish consumers pulled back on their spending during May, especially on the high street and in key retail categories such as food and beverages, and clothing and footwear,” said Paul Smith, economics director at IHS Markit. “The latest data adds to a view of a weakening Irish economy in the first half of the year, in line with the broader European and global slowdown. Against this backdrop, any notable pick-up in the coming months seems unlikely, although the recent improvements in consumer sentiment and business surveys provides hope of a return to some stabilisation and modest growth.”

1 Irish designer of Oxford vaccine: ‘I’ve never worked so hard in my life’
2 BOI customers to be charged twice with bank fees on New Year’s Eve
3 Boeing seeks dismissal of Norwegian Air’s €1bn lawsuit over Max aircraft
4 We continue to ignore massive pensions elephant in the room
5 Family who founded Ina’s Kitchen Desserts ask court to appoint examiner
6 Must I pay tax on sale of inherited apartment in Baltics?
7 O’Flynn and BlackRock to double money with €100m sale of former HP campus
8 Chris Johns: I think we are on the cusp of an economic boom
9 Goldman Sachs advises on Ulster Bank’s future, health insurance premiums to rise, and 200 new jobs for Microsoft
10 Covid-19 will worsen housing affordability, report warns
Real news has value SUBSCRIBE