Survey shows when it comes to financial prospects, women less exuberant than men 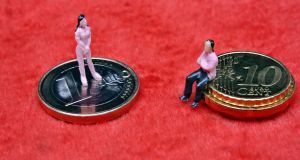 Since 2003, Irish women have been more positive on the economy than men only four times. Photograph: iStock

Irish women are typically more cautious on the outlook for their finances than men, new research shows, which also reveals that women were only more optimistic than men on the prospects for the Irish economy on four occasions over the past 17 years. And at all of these times the economy was heading for trouble.

This is according to new research from KBC Ireland, which has broken down its monthly consumer sentiment survey to assess male and female views on the Irish economy, as well as to assess how these views differ by age, over the period 2003-2019.

Consumer sentiment surveys typically give an assessment on consumers’ perceptions of their future financial situation, their economic outlook for the country as a whole and employment expectations, and are thus used as an additional indicator on economic outlook.

Since 2003, Irish women have been more positive on the economy than men only four times – out of 65 readings. Men tend to be only less confident at flash points of economic crisis. The four times women outpaced men in terms of sentiment – July 2007, April 2008, April 2010, and July 2010 – coincided with notable re-assessments of the economic outlook.

According to Austin Hughes, economist with KBC Bank and co-author of the report, along with Shawn Britton: “Men tends towards more exuberance in the good times and more fatalism or realism in the downturn.”

But what is behind the gender gap? Is it a case of psychology or something else? Hughes is unsure, but points to some indicators, such as the broader gender pay gap, soaring childcare costs (up by 14 per cent since 2003); and the fact that a higher proportion of women have third-level educations, which may tend to inform – and dampen – their expectations.

The survey also offers an insight into how optimistic or otherwise different age groups are. While all age groups (16-34, 35-54 and those aged 55 and older) saw broadly similar increases and declines in confidence between 2003 and 2019, younger people were notably more positive, and sentiment weakened progressively among older age groups up to age 65.

“Risk aversion increases with age and this influence would likely be amplified by the dramatic changes in Irish economic circumstances seen through the years 2003-2019,” the report notes.