Planet Business: No shortage of ambition 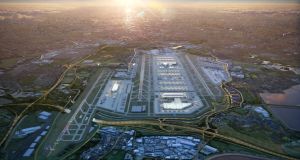 Rising sun: A computer generated image of what Heathrow might look like in 2050, if Earth makes it that far. Photograph: handout via AFP / Getty Images

Welcome to Heathrow City, please have your passports ready for inspection. This computer generated image released by Heathrow airport shows what its owners think the London airport will look like in 30 years’ time, following the completion of a third runway and new terminals. The controversial third runway, which is the strip off to the left of the picture (to the northwest of the rest of Heathrow), will require the “rerouting” of rivers and roads and is generally not seen as the most environmentally-friendly project in the potted history of humanity. The landing strip is expected to be open from 2026, with another 24 years apparently required for all the planned capacity extensions to get up and running. A 12-week consultation opened to the public this week, with final plans to be put to planning inspectors in 2020. Climate crisis-related despair is not pictured. Photograph: AFP / Getty Images.

Years since Fifa announced a totally normal and above board decision for the 2022 World Cup to be held in Qatar, with the help of a vote from Michel Platini, the former French captain who was at the time president of European football body, Uefa.

Years since Parquet National Financier, France’s serious financial crime organisation, opened an investigation into the business. This week, Platini was arrested as part of the case.

Payment in Swiss francs (about €1.8 million) that former Fifa president Sepp Blatter made to Platini in 2011 without a written contract, which led to both being banned from “football-related activities” until 2023. The two men claimed it was for services Platini had provided nine or more years earlier.

Getting to know: Patrick Drahi

Patrick Drahi is the French telecoms billionaire who isn’t majority Eir owner, Xavier Niel. The Switzerland residing French-Israeli businessman, who also has Portuguese citizenship, is the founder-controller of Netherlands-based telecoms giant Altice and also owns Portugal Telecom. But he’s in the headlines this week for another reason: he’s going to buy Sotheby’s. Casablanca-born Drahi (55) has raised his hand to acquire the NYSE-listed auction house, first established in 1744, in a deal that offers a 61 per cent premium to its stock’s closing price last Friday and values the company at $3.7 billion (€3.3bn). “Sotheby’s is one of the most elegant and aspirational brands in the world,” said Drahi. Well, you know how it is, you dabble in art collection, pick up a few pieces for your property portfolio, and before long, you might as well buy the whole gaffe.

Never knowingly underambitious Facebook has set its sights on the world of global finance via its new cryptocurrency, which it is calling libra – best known until now as the seventh sign of the zodiac. Some 28 companies and organisations have signed up to the digital currency. So who’s in?

1. Uber and Lyft. Forget banks and taxis: why not hail a ride courtesy of Mark Zuckerberg’s money-spinning money replacement?

2. Spotify. The audio streamer will also be part of the Libra Association, the Switzerland-headquartered organisation that will manage the whole thing.

4. Visa and Mastercard. Better to join up and keep a close eye on what could one day be the competition, rather than let a potentially pesky disrupter-type beat you over the head with its blockchain.

5. PayPal. Yes, it will also have a seat at this mysterious table, thank you very much.