Both sides blame each other for deadlock 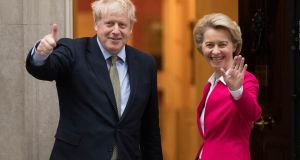 Officials see the intervention by Boris Johnson and Ursula von der Leyen as a positive move that could inject momentum into the faltering talks and give political guidance for the days ahead.

UK prime minister Boris Johnson will hold a call with Ursula von der Leyen, the president of the European Commission, on Saturday as they seek a Brexit trade agreement.

The call comes ahead of a crucial, and potentially decisive, week of talks in London to try to break the deadlock and was announced on Twitter by Eric Mamer, Ms von der Leyen’s spokesman, and was later confirmed by the UK side. Sterling rose to its highest level of the session after the news.

Both sides played down the significance of the call, describing it as a stock-taking session. Officials said there had been no breakthrough in the talks and the meeting would help set guidance for the coming days. After 14 straight days of negotiations, the two sides offered a downbeat assessment earlier this week on the state of talks, with each blaming the other for the lack of progress. The discussions are stuck on three big issues: the so-called level playing field for business, access to British fishing waters and how any potential deal is enforced.

Officials see the intervention by Mr Johnson and Ms von der Leyen as a positive move that could inject momentum into the faltering talks. EU chief negotiator Michel Barnier told European ambassadors this week that Mr Johnson will have to make a political decision to change his stance if he’s to reach an agreement.

Mr Barnier’s feeling is that London wants a deal but has yet to “internalise” the necessary compromises and concessions that are needed to reach one, according to a diplomatic note of the meeting that took place on Wednesday. Yet the contours of a deal on one of the trickiest pieces of the puzzle has emerged.

A compromise is emerging on the issue of what access EU boats will have to UK fishing waters. Mr Barnier said that the UK may be trying to keep the most difficult issues open until the very last moment in the hope of reaching a “grand bargain.”

He told the diplomats that such stalling tactics won’t work and warned that member states will need to take a decision on how to proceed unless there is significant progress next week. British officials say that they think the EU is using exactly the same ploy and one argued on Friday that Mr Barnier’s team hasn’t come to terms with the compromises required on its side either. – Bloomberg