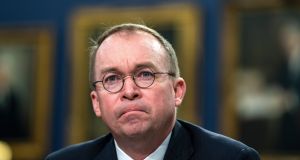 Mick Mulvaney, the US president’s special envoy for Northern Ireland, said Mr Coveney told him during a private meeting in September that the EU could use commercial aviation as a lever. Photograph: Jim lo Scalzo/EPA

The Department of Foreign Affairs has contested a claim by a US envoy that Simon Coveney said the European Union could use aviation as leverage over the United Kingdom to enforce an Irish Sea border post-Brexit.

Mick Mulvaney, the US president’s special envoy for Northern Ireland, said Mr Coveney told him during a private meeting in September that the EU could use commercial aviation as a lever to compel the British to adhere to the Brexit deal to avoid a hard border on the island of Ireland.

A spokesman for the department said Mr Coveney and Mr Mulvaney discussed aviation as part of “a wide ranging and long discussion” on EU-UK interdependence but “not as a threat”.

Mr Mulvaney, speaking on a webinar hosted by the Institute of International and European Affairs (IIEA), said he told Mr Coveney he feared that if the UK’s Internal Market Bill came into effect it could lead to a hard border in Ireland.

He said he was concerned the EU could put “tremendous pressure” on the Irish to control the flow of goods coming across the Border from outside the EU in Belfast to inside in Dublin.

Mr Mulvaney said the Minister told him there were “much more powerful levers the Europeans could pull under those circumstances than a border across the island of Ireland”.

He said that Mr Coveney referred to commercial aviation as an example “which gets to the British in some place which is a little bit closer to home, perhaps in a larger economic impact.”

Later, Mr Mulvaney told the webinar that what he took away from the meeting with Mr Coveney was that “British Airways continues to want to fly from London to the continent and if the Europeans got really, really upset they could make BA’s life very difficult.”

A departmental spokesman said Mr Coveney and Mr Mulvaney discussed how the bill “had complicated ongoing talks on a new trade deal” and that Mr Coveney had made it clear that the withdrawal agreement was “legally binding and prevents a hard border in all circumstances.”