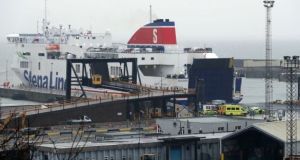 Stena and Irish Ferries will start running the new direct services from Dublin and Rosslare to Cherbourg in France to provide hauliers with a frequent service with continental Europe. Photograph: Niall Carson/PA Wire

Direct daily ferry sailings between Ireland and France will begin from January to help traders and hauliers bypass the United Kingdom to avoid delays caused by EU-UK border checks post-Brexit.

Stena and Irish Ferries will start running the new direct services from Dublin and Rosslare to Cherbourg in France to provide hauliers with a frequent service with continental Europe.

The ferry services will take at least 18 hours, making the journey longer than the current direct route through the UK to mainland Europe favoured by hauliers transporting time-sensitive loads.

Minister of State for International and Road Transport Hildegarde Naughton has urged traders and hauliers to explore alternative direct ferry routes now, before border checks at EU-UK borders congest the “landbridge” route after Brexit comes into effect at the start of January 2021.

“Businesses need to act now and they need to start talking to their logistics companies, to hauliers, to the shipping industry and to start trialling those direct routes now,” she said.

Ms Naughton said there will be delays at British ports on the Irish Sea and English Channel whether the EU and UK agree a deal or not before the transition period ends on December 31st, and that there was free capacity on existing ferry services.

She said the direct route may not be workable for some companies delivering perishable food products and time-sensitive pharmaceuticals, but that businesses should start assessing this now.

“These are conversations that businesses need to have with their logistics companies, right throughout the supply chain, to maybe ask the question: do you need this delivered within 24 hours? Could it be within 36 hours?” she said.

Irish Ferries and Stena plan to run alternate week schedules on their ferries to Cherbourg so that there is a direct, roll-on, roll-off ferry service for lorries every day from next year.

Irish Ferries will operate a Monday, Wednesday, Friday and Sunday service one week from Dublin to the port, in addition to their usual Tuesday, Thursday and Saturday weekly departures.

Stena will continue its service between Rosslare and Cherbourg on Tuesdays, Thursdays and Saturdays and plans to add a Monday, Wednesday, Friday and Sunday service on the week Irish Ferries does not sail on these days from Dublin to ensure a daily service between Ireland and mainland Europe.

Irish Ferries declined to comment on the new service.

A spokesman for Stena said that there was free capacity on its existing ferry service to France. The Cherbourg ferry out of Rosslare was two-thirds full during 2019.

He said that the shipping line can move bigger vessels onto the direct route if required. The company had received inquiries about shipping fresh food and pharmaceuticals that cannot afford to be delayed.

About 150,000 heavy goods vehicles travel across the UK landbridge every year. It is the cheapest and fastest way of getting goods to mainland Europe, taking less than 20 hours to reach French ports near key destinations and markets in Belgium, Germany and the Netherlands.

A new report from the Irish Maritime Development Office assessing the impact of Brexit on the landbridge says that importers and exporters of highly time-sensitive goods who rely on “speed to market” offered by the route through Britain “must evaluate all alternative options and where possible, re-engineer supply chains to make the alternative options workable”.

“The speed offered by the landbridge option cannot be achieved on other routes or modalities and changes to supply chains will be necessary,” says the report.