Further investment in State this year and next despite inconclusive election 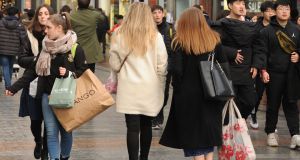 Bank of Ireland has pencilled in 3% consumer spending growth this year, easing to 2.8% in 2021 as employment levels and wages continue to rise. Photograph: Aidan Crawley

Irish economic activity may be dampened in the near term as households and businesses rein in spending amid uncertainty caused by the inconclusive general election result, according to Bank of Ireland.

“It will likely take time for a new government to be formed – if one can be – and a lot of wheeling and dealing to get an agreed policy programme over the line. As households and businesses wait to see to how things play out, it means that spending plans could be put on hold, dampening economic activity.”

While the Dublin stock market wobbled – led by banks and property stocks – immediately after the February 8th election threw up a virtual three-way tie between Fianna Fáil, Sinn Féin and Fine Gael, the Iseq has since stabilised as investors have adopted a wait-and-see approach to efforts to form a new government.

For the moment Bank of Ireland has pencilled in 3 per cent consumer spending growth this year, easing to 2.8 per cent in 2021 as employment levels and wages continue to rise.

It estimates that investment will increase in Ireland for both this year and next despite the inconclusive outcome of the general election and uncertainty surrounding future domestic policy.

Exports are predicted to expand 7 per cent in 2020, moderating to 5 per cent next year.

Ms O’Sullivan has raised her GDP growth forecast for this year by 1 percentage point to 4.8 per cent, reflecting an expected green-lighting of some business investment plans that had been put off prior to the UK agreeing a revised EU withdrawal agreement late last year.

GDP is set to expand at a more moderate pace of 3.6 per cent next year as the economy runs closer to full tilt and as businesses deal with new trading EU-UK arrangements that are expected to come into force as the transition period comes to its scheduled end.

The UK, which officially left the EU at the end of January, has a little over 10 months to reach a trade deal with the EU or it will default to trading on World Trade Organisation terms, meaning tariffs, quotas and customs checks would return for the first time in decades.

Boris Johnson’s government is currently rejecting Brussels’ insistence that London sign up to “a level playing field” on how goods are produced in the UK and EU to secure a trade deal.

“We are facing a time of significant change in Ireland, with long-standing political and trading landscapes shifting. The worst-case outcome of a ‘no deal’ Brexit has been avoided but the details of the new relationship between the UK and the EU have still to be hammered out,” Ms O’Sullivan said.

“We assume that only a limited deal, mainly covering goods, is struck between Downing Street and Brussels, meaning higher trade frictions than currently and headwinds for exposed indigenous sectors [next year].”