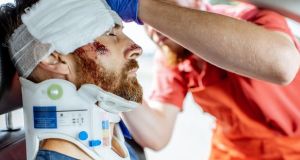 ‘Insurance companies have sold us a pup on compo culture.’

The problem with the narrative that says a “compo culture” has caused a recent surge in insurance premiums is that it is a ball of smoke fuelled by prejudice and innuendo. It is the insurance industry’s gift to modern shaming culture.

This dodgy, decrepit, deceitful narrative is propagated by vested interests and appears to be a stranger to the facts. Yet for some odd reason, wider society, including many of us who should know better, can’t get enough of it. Ravenously, we swallow it down, bones and all, begging for more. More lies.

It is simply not true that a growing number of grubby chancers on the make is the cause of the steep spike in premiums in recent years, putting innocent SMEs out of business. Virtually every reliable statistic shows that to be rubbish.

Yet the industry keeps braying that rapacious claimants are the cause of all insurance ills for butchers, bakers and merriment makers. It is the ultimate exaggerated claim. Observers who care about the facts ought to push back against it. Repeating a lie often enough does not make it the truth.

Acceptance of the “compo culture” narrative implies a few possibilities: that the numbers of claims is increasing due to fraudulent reports, that this has led to a spike in awards thus driving up costs, and that award levels are too high.

The first two are demonstrably untrue. Official data from the Courts Service shows that the overall number of personal injury claims filed in court in 2018 fell 1.6 per cent to 22,049. If false claimants were feasting on the system, that number would surely be rising. If insurers are settling claims they believe to be fraudulent then the industry needs an overhaul and has itself to blame.

District court filings, dealing with claims of up to €15,000, were down 2.4 per cent. Circuit court personal injury claims of up to €60,000 – encompassing the sweet spot for many motor claims – were down 4.3 per cent. The number of High Court cases was statistically flat.

Excluding medical negligence awards, which were down a total of 7.5 per cent, the amount awarded in other personal injury claims in the High Court was down by a fifth in total, or an average of 23 per cent in each case. The total burden on the insurance industry of personal injury claims has barely risen at all since 2013.

The last straw usually grasped at by the “compo culture” crowd is the fact that whiplash awards here are, at just above €20,000, about four times the UK level. Those figures are effectively set by judges, not the public.

Is the Irish legal system too generous? Or is the UK system too tight, awarding just an average of one month’s gross salary for a middle ranking worker as compensation for painful soft tissue damage inflicted on the neck and shoulders? Who knows. But we do know that the available data is flimsy evidence of a supposedly widespread culture of fraud among the public.

Even if you ignore the clear evidence of the court data, you cannot ignore Sinn Féin TD Pearse Doherty’s now legendary skewering of a hapless cadre of insurance industry chief executives at an Oireachtas committee meeting in July.

They each rolled up to claim, with straight faces, that about 20 per cent of all claims are “fraudulent”. Applying that metric across the industry, there must be close to 5,000 dodgy claims a year among cases that get to court alone, and perhaps eight times that number across all cases taken annually.

Yet how many suspected frauds did the industry report to guards in a six-month period until March this year? A paltry 19 in total. The “compo culture” emperor is stark blooming naked, and hasn’t worn a stitch in years. The chief executives’ Oireachtas committee performance was a grand slur against the honesty of a huge swathe of the public.

So with all this evidence to the contrary, why do we still humour this nonsense about a widespread compo culture as the cause of the recent premium rises, thus conveniently (for the industry) deflecting blame from the real reasons? Why do we listen to the egregious anecdotes of fraudulent behaviour trotted out by business owners or a recalcitrant insurance industry, and accept them as empirical evidence of something more widespread?

Many people accept the narrative because it feeds their prejudices about those whom they imagine to be responsible for most of the dodgy claims: the working classes. It’s baked into the lingo. “Compo” is earthy slang, deliberately evocative of how a certain type of person thinks people “below” them sound. Say the word “compo” out loud. You’re speaking in a working class accent.

It plays into notions about greasy proles – chancers – out to pull a stroke. You often hear a similar tenor in debates about social welfare fraud. The argument is laced with shaming and judgement, and is meant to douse the legitimacy of all personal injury claims. Its intention is to make it a shameful act to seek compensation for injury, because your neighbours must pay for your “compo”.

Journalists, too, must be wary of using the industry’s loaded language in the “compo culture” debate. When we do, we are not being impartial.

Some claimants are indeed on the make, as they are in all types of civil claims, including defamation and a large number of commercial disputes. But the majority are not. That remains a fact until the industry proves otherwise. Fraudulent claiming appears to be more widespread than it actually is because we choose to give such oxygen to egregious examples.

Insurance companies have sold us a pup on compo culture. Litigation is adversarial. Genuine claimants are not morally obliged to be restrained or thrifty. They are engaged in legal battles. The fight is on until one side vanquishes the other, so fight hard.

In addition to a personal injuries commission, there should be a separate commission of inquiry into the insurance industry’s wider practices, including its pricing, its ethics and its corporate excesses. Then we will see where the real exaggeration lies, and just who is perpetrating a fraud on people’s trust.